Zurich Insurance Group has become that latest insurer to estimate the impact of Hurricanes Harvey, Irma and Maria on its book of business. 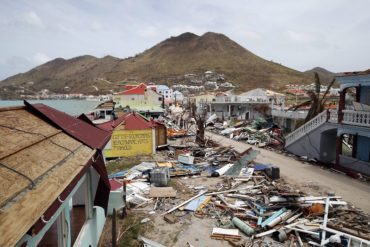 FILE – This Sept. 12, 2017, file photo, shows a view of buildings partially destroyed by Irma in the French Caribbean island of St. Martin. Tourism is a top industry in many destinations hit by hurricanes this season and the Caribbean Tourism Organization is posting updates online to keep travelers up to date on which islands have been affected. (AP Photo/Christophe Ena, File)

Zurich said in a press release on Thursday that it currently estimates aggregate claims in the third quarter of 2017 related to Hurricanes Harvey, Irma and Maria, for the Group’s Property & Casualty business, to be approximately US$700 million net of reinsurance and before tax. While final loss assessment will take time to complete due to the nature of the events, Zurich said in the release, after tax, losses are expected to be about US$620 million.

The Group does not expect to incur any reinstatement costs for reinsurance in relation to the third-quarter events.

The third quarter also saw a number of other smaller events and the company’s Farmers Re business is expected to incur a loss in relation to the three hurricanes of US$17 million net of reinsurance and before tax.

The losses are not expected to have a material impact on the Group’s overall financial strength and capital flexibility, Zurich added in the release.

“While significant, these events have demonstrated the effectiveness of our underwriting and the improvements made in our reinsurance programs over the past year, which have ensured that the overall losses remain well within our overall risk tolerance,” said Group chief executive officer Mario Greco.

In addition, Aspen estimated pre-tax losses, net of reinsurance and reinstatement premiums, of approximately US$50 million from several other events, the largest of which relate to weather-related losses and the Mexican earthquakes. About 75% of the total estimated losses are attributed to the company’s Reinsurance segment; 25% are attributed to the Insurance segment. In total, Aspen expects to record an underwriting loss of about US$340 million in Q3 2017.

On Oct. 12, Lloyd’s reported that it has already paid US$378 million related to the hurricanes. The following day, S&P Global Ratings said that “losses from these hurricanes, as well as the Mexico City earthquake that took place during third-quarter 2017, will likely wipe out global reinsurers’ annual earnings and ultimately become a capital event for this sector. Reinsurers are also nervously watching the remainder of the Atlantic hurricane season and the California wildfires.”

Among the other (re)insurer estimates: