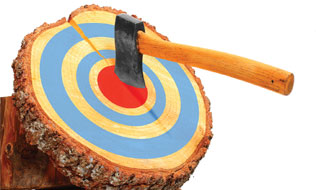 If you’re right-handed, you stand with your left foot forward. You fidget with the sweat-dampened handle of your hatchet, searching for a comfortable grip. Steadying your aim with your off-hand, you pull the axe behind your head almost until it touches your back, then lunge ahead with your right foot and rotate your shoulders toward a target six paces away. When your arms are fully extended in front of your eyes, you let go. The hatchet does one mid-air somersault before wedging itself into the wood with a satisfying thump or striking only a glancing blow before falling to the floor with an angry clank.

Seven days a week, these sounds fill 213 Sterling Road, a former warehouse in Toronto’s west end that has been home to the Backyard Axe Throwing League since February 2011. Here on a cool evening in late August, the members of one of BATL’s Wednesday night groups take turns in head-to-head competition. Although it’s late in their season, and the playoffs loom, the axe-throwers relax between their individual games. Outside, a trio plays old-time tunes on stringed instruments; others stay inside, men and women in roughly equal numbers, sipping liquor-store tallboys and giving their intermittent attention to the ongoing action.

But despite what can be a casual attitude on league nights, results matter to competitive axe-throwing’s growing number of practitioners. By the time BATL founder Matt Wilson arrives—direct from his newest Toronto location, near Yorkdale Mall—the scheduled matches are almost done, but a handful of league members stick around to practice for an upcoming trick-shot competition. “We take it seriously,” Wilson says. “We treat it like a sport.”

This is a point that he had some initial difficulty getting insurers to understand. As its name suggests, BATL began in Wilson’s backyard, in 2006. By September 2009, Wilson had a business licence and required all his axe-throwers to sign waivers. Even so, insurance companies quoted astronomical premiums or flatly refused to provide coverage at all. One insisted that six EMS staff always be on site during competition—at a time when the league had just 16 members. Finally, Wilson got help from a broker who was the brother-in-law of a friend and fellow axe-thrower. “He helped us package things in the right way so that we could explain it properly, and it would be understood on paper what we’re about,” says Wilson “Once we were able to do that, that got us insurance.”

But many are still unsure what to make of axe-throwing. Tracy Gravelle is general manager of McGoey Insurance, in New Tecumseth, Ont. Earlier this year, when Peter and Lissa McBride approached her with their new venture—Iron Nation Axe Throwing—Gravelle foresaw that finding coverage would be a challenge. “At first I thought: it sounds like a lot of fun. But at the same time, I’m like, ‘Where the heck am I going to put this?’” she says. “No regular market would even look at it.” Gravelle had the McBrides put together a manual outlining the layout of the space, measures for spectator protection and staffing details, among other things. These preparations eventually paid off. “It took me a couple weeks,” says Gravelle, “but I finally was able to hook up with an underwriter at Elliott Special Risks.”

In three months of operation, in Barrie, Ont., Iron Nation has reported no injuries. There’s little reason to think this will change; BATL saw more than 70,000 people came out to throw axes in 2014 alone. Wilson says there have been just five or six minor injuries in the league’s nine-year history and that most of these occurred in handling the axes, not in throwing them. They also enforce an important rule: drinking is fine, but those who are drunk are not allowed to throw.

Wilson partnered with an investor in August 2014 and, since that time, the league has expanded from two Toronto locations to seven in Ontario and one in Calgary. This success has inspired imitators. “We didn’t have any competitors a year ago,” Wilson says. “We’ve got five or six that have popped up over the last six months.” He hopes they imitate BATL’s vigilant supervision as well.

“Our biggest hurdle in growing was helping people to understand how we run our operation and how much we monitor it,” Wilson says. “And the game-changing thing every time has been: just come out and see it. You say it, and everybody goes, ‘Oh my god! How many people have died?’ And they come out and they see, and they go, ‘Oh. Okay. This makes sense.’

“And then they throw a couple.”