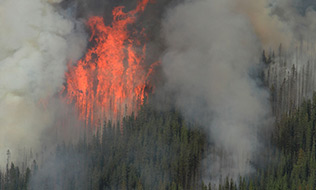 Canadians who evacuate their homes due to wildfire suffer an average financial loss of $11,300, finds a study from Square One Insurance Services Inc.

One year post-Fort McMurray, the insurance agency that specializes in home policies has released a report that says evacuees with home insurance can likely recover most, but not all, of the cost of the wildfire. In 2017, there have been 1,700 wildfires across Canada and 37% of those have occurred in Alberta.

This pace likely won’t slow, as Natural Resources Canada predicts a 50% increase in large wildfires due to climate change. “What was once a one in a hundred years event will now occur much more frequently. And, those fires will continue to cause significant damage to populated areas,” says a Square One press release.

If clients are at risk of wildfire, brokers should educate them about the risks of both direct and indirect losses that result from the blazing hot natural disaster. Potential indirect losses to consider include smoke entering the home, ash setting inside the home and food spoiling due to power outage, as well as increased costs while clients live outside their residence during the blaze – adding an average expense of $2,800, says Square One.

The report finds the most common loss that occurred as a result of the Fort McMurray wildfire was spoiled food. “This isn’t surprising since there were extended power outages. Even homes that didn’t experience power outages suffered this type of property damage. That’s because non-refrigerated food was contaminated by smoke or ash,” says the press release.

If clients want to understand how to better protect their homes from wildfire damage, Square One suggests that clients: