About 10,000 homes were in N.B. flood areas, but damage still unclear

FREDERICTON – New Brunswick’s environment minister has given a new sense of scale to the province’s record-setting floods, saying as many as 10,000 homes and businesses were within flood zones.

Andrew Harvey said Thursday that precise figures have yet to come in on the extent of the damage those structures suffered, as citizens are still filing their claims for disaster relief. 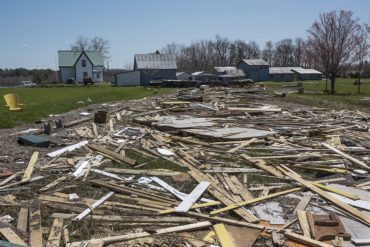 Debris from homes and cottages destroyed by flooding from the Saint John River litters the ground as floodwaters recede in Robertson’s Point, N.B., on Sunday, May 13, 2018. THE CANADIAN PRESS/Darren Calabrese

“There have been close to 10,000 for residential or commercial properties that could be affected,” he said during a news conference.

“Some of these numbers are moving as we get new information as to how many actual applications we have for disaster financial assistance.”

The minister said the figure was based on Service New Brunswick’s property identification numbers located within the flooded areas.

Provincial officials also said that as of Thursday morning, there were 2,200 people who had registered for the disaster relief program, which covers some of the uninsurable damages in an effort to get homeowners back on their feet.

Meanwhile, the province has estimated there are also about 2,000 recreational properties that have suffered damage.

The rivers – swollen by heavy rains and snow melt – swamped homes throughout the region and caused some cottages to collapse, with some even floating off their foundations.

Harvey also told reporters the province will have to consider changing the rules governing what can be built in the flood plains of the Saint John River and other waterways.

The province had announced that it will require property owners to start considering flood mitigation measures before they’re given a permit to rebuild or renovate in areas within 30 metres of the water.

However, Harvey conceded that this is merely a starting point, as wider changes to municipal bylaws and zoning rules have to be considered in the wake of the second major flood in a decade in his province.

“As time goes on those are decisions that are going to have to be made about zoning and about where people are building,” he said.

“These are some tough decisions that will have to be made … and we as a government at some point in the future will have to look at the issue about zoning.”

Craig Stewart, vice president of federal affairs for Insurance Bureau of Canada, said in an interview that there is no time to lose in getting fresh rules in place – and suggests modeling them on zoning created in High River, Alta., which suffered devastating river flooding in 2013.

“This should have been done yesterday,” he said.

“Given lessons learned from flood events over the past few years, absolute priority should be given to changing zoning laws so that we stop putting people in harm’s way.”

After the 2013 floods, High River brought in bylaws that turned the highest risk areas into parkland and prohibited rebuilding in those areas.

Harvey said he’s hoping the most recent events are heightening awareness that flooding isn’t going to be a once-in-a-lifetime event.

“I mean hopefully the message to the people of New Brunswick today is, these are not one in every 100 years. These are 2008 and in 2018, who knows when the next flood could be? Nobody knows,” he said.

Harvey said one bright spot was the announcement on Thursday that the government of Nova Scotia would be making a $100,000 donation to the Canadian Red Cross to help residents.

Nova Scotia Premier Stephen McNeil announced the funding, saying the province wants to “support our neighbours in their time of need.”

McNeil said about six provincial staff have also been sent to assist in the flood’s aftermath, to help process claims and inspect highway infrastructure.

“We support them as we had for the fires in Alberta,” said McNeil.

– Story by Michael Tutton in Halifax