The series of earthquakes that impacted central Italy one year ago have cost 208 million euros, the independent Zurich-based organization PERILS has estimated. 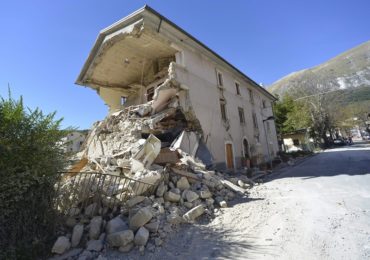 A destroyed house in the village of Pretare, near Arquata del Tronto, Italy, Tuesday, Nov. 1, 2016. Earthquake aftershocks gave central Italy no respite on Tuesday, haunting a region where thousands of people were left homeless and frightened by a massive weekend tremor that razed centuries-old towns. (AP Photo/Sandro Perozzi)

On Thursday, PERILS disclosed its final property insurance loss estimate for the earthquakes that struck Italy between Oct. 26-30, 2016. The estimate is based on loss data collected from a majority of the insurance companies active in Italy, PERILS reported in a press release.

The estimate compares to earlier loss estimate of 125 million euros, issued on Jan. 26, 2017, three months after the events.

The events consisted of three major earthquakes with moment magnitudes of Mw 5.4, 5.9 and 6.5, according to the Italian Institute of Geophysics and Volcanology. They impacted the regions of Lazio, Marche and Umbria, and affected many of the areas which had been struck two months earlier by the Mw 6.0 earthquake of Aug. 24, 2016.

Following the first Mw 5.4 earthquake on Oct. 26, 2016, the population of the affected region was evacuated to safe locations, reducing greatly the risk to life posed by the subsequent larger earthquakes, PERILS reported. As a consequence, there were only three fatalities, despite the “massive destructive force” of these earthquakes, in particular the Mw 6.5 occurring on the morning of Oct. 30, 2016. 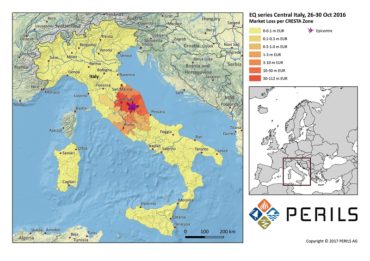 In the final loss report, the market loss data are available by CRESTA zone (province) and property line of business. The loss footprint information is complemented by instrumental shaking intensities, peak ground accelerations and loss ratios, showing the incurred losses from the earthquake as a percentage of the sums insured.