Over 80 collisions in one day after record Alberta snowstorm

CALGARY – Streets and sidewalks were a slushy, slippery mess but the sun was shining brightly in Calgary on Wednesday after a record-breaking autumn snowstorm walloped parts of southern Alberta.

The city’s director of roads, Troy McLeod, said more than 38 centimetres blanketed the city between Tuesday and Wednesday morning. Some areas got as many as 45 centimetres. 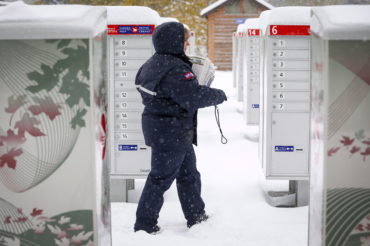 In October, the city normally gets 10 centimetres of snow over the entire month.

“Men and women have been working hard through the night for the last couple of days and we just want to thank our partners from Edmonton, Medicine Hat, Okotoks and from Red Deer coming to support us in this snow event,” he said.

Tom Sampson, chief of the Calgary Emergency Management Agency, said Calgary, and not the helping cities, will be footing the bill. But it remains to be seen whether other levels of government may assist, he said. There is no cost estimate yet.

“It was a very intense short-duration snowfall that occurred just before our rush hour, so that made the large difference,” said Sampson, who added that the city will consider whether it makes sense to call in help from other communities for future out-of-the-ordinary snow events.

Several city buses got stuck on the roads Tuesday. Transit director Doug Morgan said Wednesday was a better day, but a few buses were still unable to make it up hills.

“I would call today a challenging day, but fairly conventional when it comes to winter operations.” Morgan said there will be a review of how operations can be improved in future.

Part of the main highway between Calgary and Edmonton was closed overnight due to a multi-vehicle crash involving up to 30 vehicles. One person died. The road didn’t open again until 5 a.m.

West of Calgary, hundreds of people were stranded for up to 13 hours on the Trans-Canada Highway. Police escorted stranded motorists to a warming centre at a high school in Canmore, just outside Banff National Park, early Wednesday morning.

By mid-day, the Trans-Canada and secondary Highway 1A west of Calgary had reopened, but traffic was still backed up and travel was not recommended.

Rosemary Thompson, vice-president at the Banff Centre for Arts and Creativity, landed at the Calgary Airport from Toronto on Tuesday in the thick of the snowstorm.

As she got on a shuttle bus to Banff, she asked the driver whether he had enough gas. He told her they’d be fine for two days.

“It was terrible. It was epic,” Thompson said.

She and the 30 or so other passengers passed the time chatting. She told one visitor from the United Kingdom, who was hoping to see some fall colours, that he’d enjoy Christmas instead.

She said the driver handled everything like a pro.

“He was the picture of calm and cool all the way through this and he was watching his iPad for the 511 emergency information online and he was able to tell us what he thought was going on,” she said. “I really give him a lot of credit because he really set the tone on the bus and everybody got through.”

Thompson said she saw several vehicles trying to pass along the shoulder but ended up in the ditch. The whole time, she only saw one RCMP vehicle, she said.

Wednesday was a much better day, she said.