Did Dorian create a capacity issue for claims adjusters?

Even though post-tropical storm Dorian knocked out power to about 80% of homes and businesses in Nova Scotia, and left thousands more without power in the other Atlantic provinces, claims adjusters were well-equipped to deal with its aftermath.

“In the industry, there was tremendous capacity from an adjusting perspective, both from the insurer side and also from the independent adjuster side,” reported Kumar Sivakumaran, vice president of national operations at ClaimsPro. “We had no difficulty. We had the footprint and more than enough resources on the east coast.” The independent adjusting firm was able to handle the claim volume within its “local capacity and then take care of it immediately,” he added. 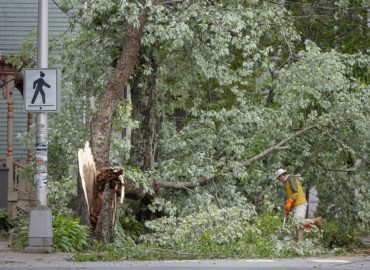 An unidentified man trims a fallen tree outside his residence in Halifax on Sunday, Sept. 8, 2019. Hurricane Dorian brought wind, rain and heavy seas that knocked out power across the region, left damage to buildings and trees as well as disruption to transportation. THE CANADIAN PRESS/Andrew Vaughan

“We had enough adjusters to respond to the influx of claims we got from Dorian,” agreed Shelley Landry, vice president of eastern Canada operations with Crawford Canada.

Dorian made landfall Sept. 7 near Halifax, with winds reaching nearly 150 kilometres per hour in the Halifax area (more than 119 km/h is considered hurricane force). The storm knocked down power lines and trees, toppled a construction crane in Halifax, and resulted in school closures. Some customers had power out for days.

What type of claims did adjusters see? For Crawford Canada, it saw mostly property damage as a result of the wind, which swept across Atlantic Canada in a much wider area than a “regular” wind storm. “We also did see some water damage, as well as some more significant commercial losses and some business interruption,” Landry said. And given the strength of the winds, “we certainly saw both an increase in the number of losses, as well as more extensive damage than we would typically see from just a minor wind event.”

Sivakumaran said the main exposure for ClaimsPro was business interruption for commercial losses, with almost all commercial claims having a BI component. For personal lines losses that were smaller, insurers handled the claims in-house. ClaimsPro did see some losses for things like shingles blown off roofs and fence siding damage.

Earlier this month, Catastrophe Indices and Quantification Inc. declared Dorian a cat event, meaning it will cost the industry at least $25 million in insured damage.

The industry’s capacity to handle Dorian contrasts with the May 4-5, 2018 wind storm that struck Ontario and Quebec. The costliest disaster of 2018 cost over $600 million in insured losses and stretched adjusting resources thin. Sivakumaran said last year’s storm saw a high frequency of claims (about 10 times what ClaimsPro saw for Dorian, and more personal line losses), but low severity.

“Most of our adjusters in Atlantic Canada are licensed for all of the provinces year-round, so we don’t wait for a storm to happen to get that licensing in place. We keep those licenses active year-round so that in the event of something like this, we’re able to respond quickly.”

The only adjuster movement Crawford had to make was bringing in some adjusters from New Brunswick to help in PEI, Landry said. But that was because an adjuster in PEI was assisting in The Bahamas, where the hurricane claimed more than 50 lives.

Crawford Canada’s hub in Nova Scotia luckily didn’t lose power during the storm. Even if that was the case, however, a lot of adjusters can work from home or remote workstations and “we’ve got resources across the region that step up and help out immediately without having to wait for any delays in licensing,” Landry said.