How Quebec floods are challenging adjusters

Many homes flooded in Sainte-Marthe-sur-le-Lac, Que. will be total losses and may not have overland flood coverage, a vice president for an independent adjusting firm suggests.

Claims adjusting firm ClaimsPro is involved in about 2,000 flood claims from April in Quebec alone, Michel Lacelle, vice president of organizational services in Eastern Canada for ClaimsPro/IndemniPro, said Wednesday in an interview.

Thousands of Canadians have been affected by recent flooding along the Saint John River in New Brunswick as well as in Ontario and Quebec. 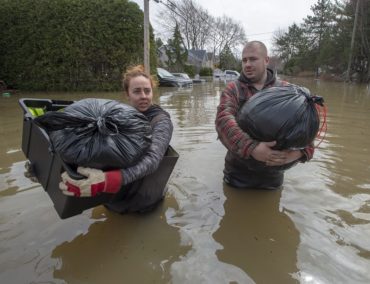 Water from the Lake of Two Mountains northwest of Montreal breached a dike this past Saturday and flooded the community Sainte-Marthe-sur-le-Lac. Some homes in the area were flooded up to the main floor in five minutes, Lacelle said Wednesday. A lot of those homes will be total losses, he added.

“We are really, really busy” with flood claims in Canada, he said.

Across Canada, most of the residential properties affected by this month’s flooding do not have overland flood coverage, said Lacelle. He added it is too early to tell what the industry-wide insured losses or economic losses will be.

But the Quebec flooding “most definitely qualifies as a catastrophe,” because it will cost governments hundreds of millions of dollars, Insurance Bureau of Canada spokesperson Pierre Babinsky told Canadian Underwriter Tuesday.

In Sainte-Marthe-sur-le-Lac, about one-third of the homes (about 2,500) are now flooded, and about 6,000 residents have been evacuated, Lacelle said.

ClaimsPro is anticipating a lot of claims in a few weeks or so east of Quebec City, in areas which are not experiencing flooding yet.

The Ottawa River is 30 cm above the peak levels of severe flooding in 2017, and could go up another 20 cm depending on the weather in the coming days, The Canadian Press reported.

Public Safety Minister Ralph Goodale was quoted by CP as saying about 9,200 residences and cottages remain flooded in New Brunswick along with 7,000 other properties of different kinds.

In Ontario’s cottage country, the municipalities of Bracebridge, Huntsville, Muskoka Lakes Township and Minden Hills are in a state of emergency.

Near Windsor, the Essex Region Conservation Authority issued a flood warning for part of the municipality of Leamington along with flood watches for residents living along the Lake Erie, Lake St. Clair and Detroit River shorelines.

-With files from Canadian Press