MONCTON, N.B. _ Three years after a Moncton man in an electric wheelchair was struck and killed by a freight t-ain at a level crossing in the city, a lawsuit stemming from his death has been resolved.

Steven Harel’s wheelchair became stuck at a railway crossing on Robinson Street in July 2016, and court documents say he waited an “excruciatingly long time” before the train killed him.

Harel’s parents sued CN Rail, the City of Moncton, a wheelchair manufacturer and a medical equipment supplier in New Brunswick’s Court of Queen’s Bench for unspecified damages related to the 29-year-old’s death. 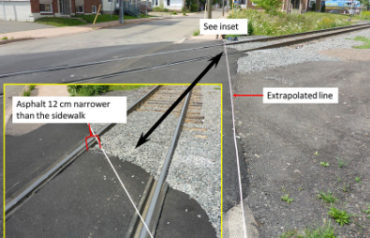 However, Diane and Yvon Harel now say, while they are still devastated by the loss, they are pleased with the work done since their son’s death to improve the safety of railway crossings in Moncton and other communities.

“Everything we’ve done is for Steven’s friends, because they keep going by those railway crossings every day. That’s why we did it and we’re satisfied,” Diane Harel said Tuesday.

“It’s not going to bring him back, but at least if we can do it for his friends. That’s a lot for us.”

The couple’s lawyer, Brian Murphy, said details of the settlement, including any financial component, will not be released.

“This wasn’t a suit based on making buckets of money. This was a suit based in hurt and based in a conscience that wouldn’t go away on the part of these two lovely parents who lost their son,” Murphy said.

“Something needed to be improved, and they probably have saved multiple lives for people like their son.”

The Transportation Safety Board released its report on the incident in February 2018 and called on federal and local authorities to improve safety at railway crossings designated for people using wheelchairs and other assistive devices.

The TSB said in its investigation that several crossing conditions contributed to the accident, including a gap in the asphalt and a lack of visual cues to navigate safely.

It’s believed one of the wheels on Harel’s chair dropped into the gap in the asphalt and became stuck in gravel, making it impossible for him to reverse.

The crew on the 12,200-tonne train spotted the silhouette of someone in a wheelchair on the tracks in the early morning darkness of July 27, 2016 but could not stop in time.

“It hurts,” Diane Harel said. “We lost a big part of our family.”

The couple’s lawsuit alleged that CN Rail and the City of Moncton neglected their “duty of care” to inspect, maintain and fix the railway tracks, crossings and city streets and sidewalks. It also alleged they failed to facilitate safe public transportation and prevent accidents, particularly with regard to wheelchair-specific hazards.

The statement of claim also said Invacare Canada and Embracor Medical, which manufactured and sold Harel’s wheelchair, respectively, were both liable in his death for their roles in providing him a device the lawsuit claimed was “unreasonably dangerous” due to an alleged defect.

Murphy said Tuesday that all issues have been resolved, and the family is satisfied.

“Essentially there has been an amicable resolution of all claims by the Harel family against all of the parties mentioned (in the suit),” Murphy said.

In April, the federal government announced it would close particularly dangerous rail crossings and upgrade many others to improve rail safety.

Transport Minister Marc Garneau said Transport Canada would provide $16.5 million for 136 new projects, including improvements to 104 level crossings and other rail infrastructure across the country. Garneau made the announcement in Moncton, just a few blocks from where Harel died.

Murphy said while such improvements are good, there needs to be heightened awareness of accessibility for wheelchair users across Canada.