What claims adjusters are seeing from Fiona

Claims adjusters are seeing a wide variety of personal and commercial lines claims in the wake of post-tropical storm Fiona – everything from food spoilage and infrastructure claims to total losses.

“Currently, we are seeing claims for personal and commercial lines property and automobile claims,” Heather Matthews, chief client officer with Crawford & Company (Canada) Inc., told Canadian Underwriter Tuesday. “There are a lot of downed trees that have made impact with cars, homes and businesses. We are also seeing infrastructure claims and claims for government buildings.”

Severity ranges from wind damage in yards with fences and trees down to total losses where homes have been destroyed, she said. The traffic for Crawford’s call centre was six times the normal weekend volume, while the adjusting firm’s Contractor Connection saw 50 times its normal volume.

For ClaimsPro, the extent of the damage is severe and widespread.

“We are seeing everything from total losses [such as] houses being washed away to rooftops being peeled off commercial buildings to general downed trees and losses caused by power outages,” said Anita Paulic, director of operations & catastrophe response with ClaimsPro. “These are both in personal/residential and commercial lines. At the moment, we are not seeing too many business interruption losses, but expect these will start to increase in the coming days and weeks.” 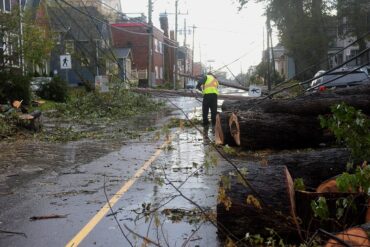 A worker begins the process of cleaning up after post-tropical storm Fiona, in Charlottetown, Monday, Sept. 26, 2022. Across the Maritimes, eastern Quebec and in southwestern Newfoundland, the economic impact of the storm’s wrath is still being tallied. THE CANADIAN PRESS/Brian McInnis

Many areas are still without power and even cellphone service, Paulic noted. “As such, we don’t have a complete picture of the extent of damages today but expect the full results [will] become clearer in the next few days.”

While it’s still too early to fully estimate the extent of the damage, ratings agency DBRS Morningstar is already estimating the storm could cost the Canadian P&C industry between $300 million and $700 million.

“Fiona will likely be one of the largest catastrophic events in history for Atlantic Canada,” said Patrick Douville, DBRS’ vice president of insurance. “This would be significant but not large enough to affect the financial strength of the large, nationally diversified insurance groups which are the top participants in the property insurance market in Atlantic Canada.”

Sedgwick in Canada expects the storm to be a significant claims event and the firm has mobilized field adjusting and desktop teams from both Canada and the U.S.

“While our current case load is mostly personal lines work, we anticipate an increased amount of auto, commercial/industrial, municipal, and specialty losses due to wind and water,” said Michael Galea, senior vice president of operations with Sedgwick in Canada.

“As we tend to see with many storms, the scope of damage changes quickly, so it’s difficult to say at this time what the true extent of damages may be.”

ClaimsPro, CRU Group and others are using a mix of desk deployment and field work.

“We’ve got adjusters being deployed to sit behind a desk to work with people on those smaller claims – the food spoilage claims, things like that – that can be handled from a desk,” CRU Group CEO David Repinski said in an interview with CU. “We’ve also deployed a fair number of field adjusters to do the actual physical inspections on the more significant losses.”

It’s worth noting that while CRU Group is currently seeing property claims, they do expect more auto claims. “Depending on where they are and the significance of the storm surge, you’re going to have some cars that were flooded out,” Repinski said. “There’ll be a bit of a lagging indicator, but we’ll see those arise as well.”

CRU Group expects both large claims and a relatively high number of smaller claims, such as those related to food spoilage.

“You get this real disparity. You get the really heavy structural damage… but then you get this widespread radius of rather minor claims,” and then there is a middle ground, Repinski said. “You’ve got people who have no structural damage whatsoever but don’t have power.”

Another compounding issue is that many people live in historic or older homes that aren’t built to current standards or codes.

For ClaimsPro, it can be a challenge to get onsite in some of the more remote areas impacted by the storm.

“Some challenges we are facing is the distance to get onsite in some of the more remote areas,” Paulic said. “Many of the smaller regions still do not have power so we have centralized our adjusters in the larger centres and we are mobilizing them to travel in and out to the more remote locations, ideally in clusters for efficiency. Logistics are a challenge, but we expect things to be mitigated as power is restored and we can move out more broadly for longer durations.”

ClaimsPro and other adjusting firms said they are also able to use web-based and mobile technology tools to speed up the adjusting process.

Feature image: Workers start to clean up the devastation left by hurricane Fiona in Burnt Island, Newfoundland on Wednesday September 28, 2022. Newfoundland and Labrador is setting aside $30 million for residents affected by post-tropical storm Fiona. THE CANADIAN PRESS/Frank Gunn

More News
Related
How much will Fiona cost Canadian P&C insurers?
How to speed up claims response for NatCats
Rising lumber, materials costs lead claims professionals to tweak their approach
Why insureds might need parametric coverage alongside conventional policies