Post-tropical storm Fiona swept through Atlantic Canada and eastern Quebec this weekend, knocking out power to hundreds of thousands of people, washing away homes and cottages, and causing widespread flooding and infrastructure damage.

While the insured and economic damages associated with the storm are still being assessed, more than half a million people were left in the dark at the height of the storm on Saturday, the Canadian Press reported. This included 80% of Nova Scotia Power’s customers and 90% of Prince Edward Island.

In Port Aux Basques, a 73-year-old woman died after being swept out to sea, and a record-breaking storm surge swamped a residential neighbourhood, smashing or submerging numerous homes and outbuildings.

Widespread power outages were also reported. By late Sunday afternoon, more than 242,000 homes and businesses in Nova Scotia were still without electricity. In P.E.I., more than 82,000 Maritime Electric customers remained in the dark, CP said. 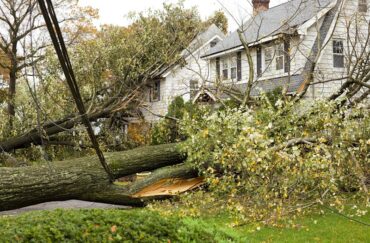 “Recovery and rebuilding efforts after a major hurricane are hard enough but rising inflation and supply chain is going to compound that.”

Deol said it’s not a matter of if another powerful storm will strike Canada, it’s when. “So, long-term preparation really is key.”

Although there are minimum standards for building codes, those are just that – minimum standards, she said. “If you’re building a new home or you’re replacing something, it might be worth spending a few extra dollars above that minimum standard so that you’ll actually save money in the long term.”

When it comes to construction of new homes, hurricane straps that connect the roof with a wall and foundations are advised (retrofitting can also increase a home’s defence against severe wind damage).

“We can incentivize people to build better with discounts for certain installations [and] improvements that we know are going to stand the test of time; they’re going to be more resilient,” Deol said.

Earlier this year, Institute for Catastrophic Loss Reduction (ICLR) managing director Glenn McGillivray told Canadian Underwriter the institute’s been working for a number of years to try and get hurricane straps or hurricane clips included in the Ontario building code.

“By upgrading our homes and considering whether to even rebuild in the same location following a disaster, we can improve our resilience to the increasing threat of severe weather,” Deol added.

It’s also important that policyholders understand their flood coverage, or lack thereof, especially in high-risk flood zones where coverage may not be available.

“Are you aware as a homeowner which zone you’re living in, what is covered, and what’s not?” Deol asked. “Definitely the time to find out would be before an event, not after.

“And it’s been shown that communities with insurance protection recover quite a lot faster than those that don’t [have coverage]. It’s in the interest of… the insurance industry, but most definitely the consumer, that they know what they’re covered against.

“It’s not in anybody’s interest for a consumer to be unhappy after the big event due to a lack of clarity of policy coverage.”

Feature image: Two cottages were destroyed in a cottage development in the French River area of Prince Edward Island on Sunday September 25, 2022. After hammering Atlantic Canada, post-tropical storm Fiona has moved inland in southeastern Quebec, with Environment Canada saying the storm will continue to weaken as it tracks across southeastern Labrador and over the Labrador Sea. THE CANADIAN PRESS/Brian McInnis

More News
Related
How much will Fiona cost Canadian P&C insurers?
What claims adjusters are seeing from Fiona
What happened to the ‘quiet’ hurricane season?