VICTORIA – The British Columbia government has cancelled the state of emergency it declared in August when hundreds of wildfires engulfed the province.

The government says cooler weather and progress in containing the forest fires means the powers granted under the provincial state of emergency are no longer required. 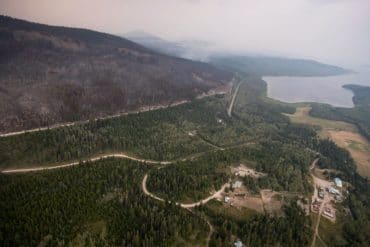 Homes are seen near where the Shovel Lake fire burned in Fraser Lake, B.C., on Thursday August 23, 2018. THE CANADIAN PRESS/Darryl Dyck

The Ministry of Forest also lifted campfire bans across much of the province as rain moved in.

The bans were rescinded in the Prince George, Cariboo and Kamloops fire centres effective on Friday.

Campfire bans will be partially rescinded in the Coastal, Southeast and Northwest fire centres, allowing fires in some zones but not in others.

However, the burning of grass, use of tiki torches, chimineas, sky lanterns, fireworks, burn barrels and other combustible devices are still prohibited in all centres.

The provincial government says there’s been a significant reduction in the number of properties under evacuation order and many residents have been allowed to return home.

It says the state of emergency declaration was made to ensure public safety and the co-ordinated response to the summer wildfire season that has seen more than 13,000 square kilometres burned.

The wildfire season isn’t over yet with 485 fires still burning, 19 evacuation orders in place covering about 2,000 people, and evacuation alerts affecting almost 4,900 residents.

This is the second year in a row a state of emergency was declared over the wildfires, but last year’s declaration remained in place from early July to mid-September.

There is also a reprieve from the smoke from the summer wildfires in B.C. and Washington state that at its peak had spread across the country.

The Metro Vancouver regional district lifted its air quality advisory for the area and for the Fraser Valley.

Environment Canada’s forecast for B.C. said it may take a few more days to see marked improvements in the air quality for the Interior regions, while the arrival of a trough of low pressure late Thursday and early Friday brought fresh southwest winds and improving air quality over coastal regions.