Although property damage as a result of the wildfires in British Columbia has been “light” so far this year, the industry must remain vigilant as this could change quickly, said Glenn McGillivray, managing director of the Institute for Catastrophic Loss Reduction (ICLR).

The Canadian Press reported Friday that a 360-square-kilometre blaze destroyed more than 40 homes and properties in Telegraph Creek. The provincial government has declared a state of emergency, as nearly 600 wildfires continue to rage across the province. Smoky skies have grounded multiple flights at Kelowna International Airport and air quality advisories have been issued for multiple jurisdictions. As of Sunday, an estimated 14,000 people have been evacuated from their homes, Canadian Press reported. Recently, Kimberley, B.C., which has more than 4,500 residents, has been put on evacuation alert.

Intact said is monitoring the B.C. wildfire situation closely and “teams will be able to respond immediately to support customers if the situation worsens.” A spokesperson for Wawanesa Insurance said the company is “monitoring the situation daily and we will respond accordingly, but to date no deployment of our National Catastrophe Team has been necessary.” 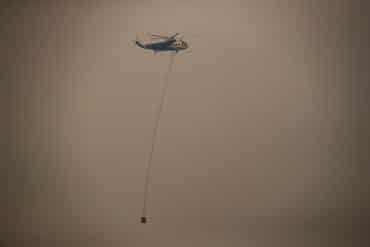 A helicopter with a water bucket arrives to help battle the Shovel Lake wildfire burning near Fraser Lake, B.C., on Friday August 17, 2018. THE CANADIAN PRESS/Darryl Dyck

McGillivray reported that 12 communities were in high-risk zones as of Sunday. On Monday, the Fire Danger Rating map for B.C. has large swathes of the province painted in oranges and reds (high to extreme risk). While there are much smaller areas of yellow (moderate), there are no blues or greens (very low to low risk).

Smoke from the wildfires has reportedly reached as far as Edmonton, Alta. Could the poor air quality translate into claims? Steve Kee, director of media and digital communications for the Insurance Bureau of Canada, said smoke damage to property caused by wildfire is covered under a typical homeowner’s insurance policy. As an example, he said that the majority of claims from the Fort McMurray wildfire in 2016 were for smoke remediation as a result of the wildfire.

As of Aug. 13, B.C. had already exceeded the number of fires for the entire 2017 fire season. More than 604,000 hectares have burned across the province from 1,891 fires. The area burned, however, is still down compared to last year, when more than 1.2-million hectares burned. No year-to-date data is available for comparison.

McGillivray noted this year will be costly from a fire suppression standpoint and from a “disruption” standpoint, since several communities, including First Nations, have been evacuated or are on evacuation alert (such as Kimberley).

Canada is fortunate in that it has an “excellent and efficient” system of mutual assistance, managed by the Canadian Interagency Forest Fire Centre (CIFFC), McGillivray said. CIFFC coordinates not only mutual assistance between provinces, but also international assistance (at this time, Australia, New Zealand and Mexico have sent crews to B.C.).

“But in the future, as we see more and bigger fires on the landscape, we likely will not be able to effectively attack each one, and we will find ourselves in situations where responses will have to be triaged,” McGillivray said. “Some fires will be left to burn. This will be the reality of a warmer, dryer future in some places, including parts of Canada.”