Blizzard response wraps up in Newfoundland after historic storm

ST. JOHN’S, N.L. – The Armed Forces have wrapped up their mission in Newfoundland and Labrador after dispatching to the provincial capital more than a week ago to help with recovery from a historic blizzard.

Premier Dwight Ball thanked the reservists and soldiers Tuesday for supporting residents after the Jan. 17 winter storm that dumped more than 76 centimetres of snow on St. John’s in a single day. 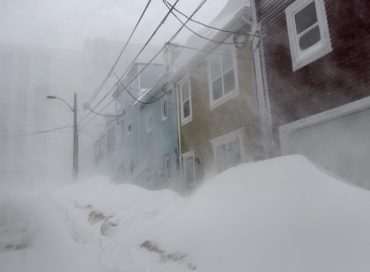 High winds and heavy snow cause white out conditions in St. John’s on Friday, January 17, 2020. The City of St. John’s has declared a state of emergency, ordering businesses closed and vehicles off the roads as blizzard conditions descend on the Newfoundland and Labrador capital. THE CANADIAN PRESS/Andrew Vaughan

A statement from the province’s Department of Municipal Affairs says responding personnel completed 900 tasks in the St. John’s area, mostly helping snowbound Newfoundlanders dig out of their homes.

The statement says the phase of the cleanup with the Armed Forces is over, but reminds people that municipalities are still working to widen roads and clear sidewalks.

The City of St. John’s was under a state of emergency for eight days in the wake of the storm, but that declaration was lifted Saturday morning.

Municipal Affairs says the department’s priority is safety and asks residents to check in on neighbours, especially seniors and people with disabilities.

This report by The Canadian Press was first published Jan. 28, 2020.