VANCOUVER – A powerful snowstorm that has closed part of Highway 1 east of Vancouver, shuttered every public school and university across southern Vancouver Island and Metro Vancouver, has now led to a rare blizzard warning for a region just north of the city. 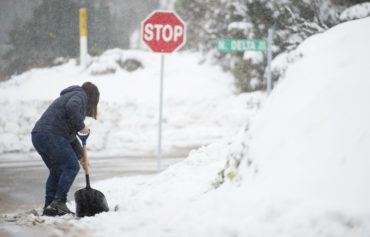 A lady shovels her driveway as snow continues to fall in Burnaby, B.C., Tuesday, January, 14, 2020. THE CANADIAN PRESS/Jonathan Hayward

The blizzard warning comes as more than 25 centimetres of snow blanketed Greater Victoria and parts of eastern Vancouver Island overnight, with more expected, while at least 15 centimetres fell across Metro Vancouver.

Treacherous conditions forced officials to close a section of Highway 1 through the Fraser Valley early Wednesday while snow and ice have also played havoc with transit services across the Lower Mainland.

Extreme cold, winter storm or snowfall warnings are in effect for all but a handful of regions from British Columbia, Yukon and Northwest Territories all the way to northern Manitoba.

Victoria, Metro Vancouver and much of B.C.’s inner south coast will also be battered by strong winds over the next 24 hours, as wind warnings are posted and forecasters say gusts of up to 90 km/h have potential to bring down trees and cause power outages.