CatIQ has reported more than 15,000 insurance claims, including 1,800 car collisions, due to the storm. Strong winds, flooding, heavy snow and ice build-up swept through Ontario and Quebec from April 14-16. Aon Benfield’s Impact Forecasting said that freezing rain led to more than 100,000 customer outages in Ontario after the ice accumulation brought power lines down.

The vast majority of claims occurred in Ontario, including the Greater Toronto Area. 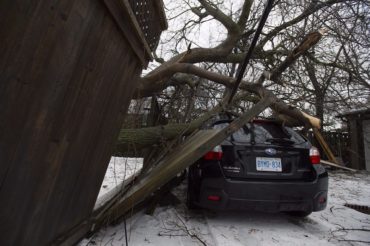 A car damaged by a fallen tree branch is shown in Toronto, Monday, April 16, 2018. Tens of thousands of people across southern and central Ontario remained without power Monday morning as the province’s massive ice storm transitioned to drenching rain. THE CANADIAN PRESS/Frank Gunn

Kim Donaldson, vice president of Ontario with the Insurance Bureau of Canada (IBC), noted in a press release that this past year in Ontario alone, CatIQ has tracked over $600 million insured damage from weather-related events.

Insured losses from events such as the ice storm are increasing rapidly, she said. “A generation ago, insurers paid out – on average – about $400 million a year in today’s dollars across Canada on weather-related costs,” Donaldson said. “Now that number often tops $1 billion a year, and sometimes it goes much higher.”

On the weekend of the storm, Toronto had been under a flood watch for two days after freezing rain and ice pellets left roads and sidewalks slippery and treacherous. At one point on April 15, winds at Toronto Island airport reached 96 km/h. The international airport in London, Ont. got 14 hours of freezing rain mixed with ice pellets, for a total water equivalent of 55.1 mm. Wiarton Airport, near Owen Sound, received nearly 40 cm of snow April 14.

Earlier this month, Verisk Analytics’ Property Claim Services issued a preliminary estimate of the event at $164 million in insured losses.

Total economic damage was expected to approach US$250 million, according to Aon Benfield’s Global Catastrophe Report.