Cause of $25 million fire remains under investigation

BRANDON, Man. – A massive blaze that burned through historic buildings in downtown Brandon last month caused about $25 million in damages and police now say it may have been started by people.

Fire crews were called to the Christie’s Office Plus building in the western Manitoba city on May 19. 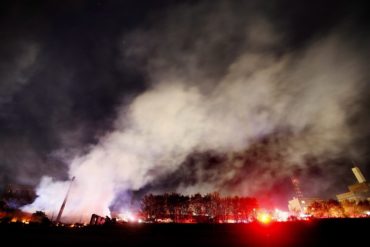 But strong winds spread the fire to nearby businesses and an apartment building across the street.

Brandon police, local fire services, the Office of the Fire Commissioner and the Canadian Pacific Police Service are all investigating the cause of the fire.

Police say multiple witnesses saw several people in the area before the building went up in flames.

But they say the people have not been identified.

“It is unknown at this time if the fire was deliberately set or is accidental in nature,” Brandon police said in a release Monday. “To date, there is no evidence to indicate that operational activity on the rail line caused ignition.

“This incident remains under investigation by the involved agencies.”