Does your claims app verify the car crash photos you’re getting?

A car crashes into a hydro pole. The driver takes pictures of the damage on a mobile device and sends the photos to the insurer through an app to start a claim. 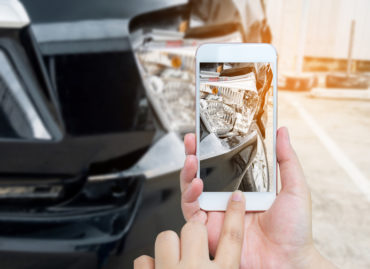 How does the insurer know the photos have not been altered?

Insurtechs have been in the forefront of introducing new ways to expedite the consumer claims process—including several cutting-edge technologies designed to record collision damages for insurers and adjusters. Notice of loss mobile apps are now quite sophisticated. They allow drivers to live-stream conversations with their insurers; employ sensor data to reconstruct a crash; and record crash details through mobile telematics offerings.

With video estimating coming into vogue (and approximately 2 billion photos uploaded to the internet each day), one insurtech in the United States has turned its attention to acting as a “photo notary.” Its technology can authenticate and verify photo and video submissions to insurers through claims apps.

The technology can be inserted into any company’s claims app. The benefit for insurers is that the technology immediately detects the possibility of fraud, in which case the company can turn the file over to an adjuster.

“The technology authenticates and verifies all the photos and videos taken on it instantly,” says Mounir Ibrahim, vice president of strategic initiatives with Truepic, a California-based insurtech.

Specifically, four things happen once you press the shutter button on the app. All of these things happen within a second of taking the picture.

First, the metadata from the particular photo taken is saved onto the tech company’s servers. When asked about privacy laws, Ibrahim noted the metadata is not from the phone, but only of the individual picture when it is taken using the app.

Secondly, a “chain of custody” is placed on the image so that the image’s metadata is always known, starting at the time when the photo was first created. When mobile devices take a picture, the pictures are not connected to any server. The picture could be altered before uploading and no one would know what was done to the photo prior to the upload.

“When we save all the metadata, it is literally like we are holding the picture at all times,” says Ibrahim. “Any attempts to alter it will be known.”

Third, all unique identifying information restored on the photo or video is written to the (bitcoin) blockchain. “Without the blockchain piece, we could tell you, ‘It’s all on our servers, you can trust us, it’s never been altered, and it all works.’ But now, [the technology] will spit out a blockchain receipt almost instantly, and you can look up that receipt and compare it on the blockchain reader anytime.”

Fourth, the image is tested for authenticity.  “The test we are running is to make sure it is not a jail-broken phone—with that, you can spoof your location and edit it,” said Ibrahim. “We’re doing reverse-image searches on it to test that it’s not a picture of an actual picture.”

The technology is not available in Canada yet, although carriers in the United States are making use of it. Its features have wider application than just spotting insurance fraud – for example, it could be used to verify the authenticity of photos posed on dating websites, as well to verify pictures posted on sales sites like Amazon, or homesharing photos posted to Airbnb.

2 Comments » for Does your claims app verify the car crash photos you’re getting?