What claims Crawford expects to see from New Brunswick flooding

Claims adjuster Crawford & Company (Canada) Inc. is anticipating “numerous water damage claims to homes, business and automobiles” as a result of the flooding in New Brunswick.

Shelley Landry, director of operations of Crawford Canada’s Atlantic region, told Canadian Underwriter Thursday that as water levels continue to drop, “we will likely see an increase in reported losses, as those impacted slowly return to their homes and begin to pick up the pieces.” Landry noted that losses resulting from these types of events are typically reported a few days afterwards, as people need to come to terms with the event, understand the impact and then reach out for assistance. 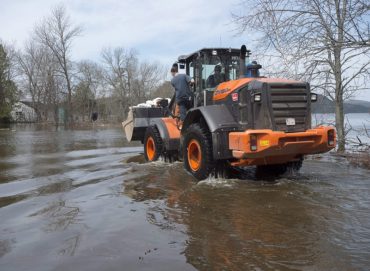 A front end loader carries sand bags to an area of Rothesay, N.B. cut off by flood waters on Sunday, May 6, 2018. Swollen rivers across New Brunswick are still rising, flooding streets and properties and forcing people from their homes in several communities. THE CANADIAN PRESS/Andrew Vaughan

The Canadian Press reported that the flooding in central New Brunswick is finally stabilizing after reaching “record levels” several days ago. Some cottages, trailers and other recreational gear floated away on the Grand Lake as a result of powerful winds. The New Brunswick Emergency Measures Organization (EMO) also warned residents Tuesday that the current in the St. John River is strong and the water is cold and carrying debris. The floodwater itself can also be heavily contaminated with sewage and pose health risks such as sickness and infections.

“Consequently, we could see some loss reports as a result of all this,” Landry said, adding that Crawford’s cat response team is on standby to assist.

For Wawanesa Mutual Insurance Company, their cat team has had a busy spring, with wind and rising water impacting a number of communities across Canada. “Our New Brunswick team is monitoring the water levels and pleased that recent reports are suggesting that the water is receding,” a Wawanesa spokesperson told Canadian Underwriter. “They are standing by as our customers return to their homes. Our local and experienced adjusters are ready to respond quickly, as we do for all customers impacted by these ever-increasing events across Canada.”

Generally speaking, in many of the affected areas, there tends to be a degree of flooding or high water levels each spring, but not to this extent, Landry said. “Depending on the extent of insurance coverage made available to and purchased by residents in the impacted areas, there is a likelihood that we will see a number of requests submitted to [EMO] for assistance.”

EMO reported that as of Wednesday, 634 households composed of 1,464 people have registered with the Canadian Red Cross, indicating that they had evacuated their properties.

Media reports have called this flooding event “historic,” comparing it to other major floods in the province in 1973 and 2008. “The flooding itself is being reported as reaching ‘record levels’ in comparison to past events,” Landry said. “The actual water levels themselves, combined with the extent of the geographical area impacted, make this quite the unpleasant event.”

Many provincial and municipal roads have been covered by a “significant amount of water” for more than a week, EMO said. Municipal and provincial officials will be inspecting closed roads, culverts and bridges before they are reopened to determine if remedial work is necessary to make them safe for motorists. Media reports say more than 150 roads have been affected.

According to CBC, communities between Fredericton and Saint John are expected to remain above flood level until the weekend.