The damage caused by this tanker truck crash on Ontario highway

November 1, 2018   by Adam Burns and Alanna Rizza - THE CANADIAN PRESS

TORONTO – Two men were killed in a multi-vehicle crash that sparked a massive tanker fire on a major toll highway in the Toronto area on Wednesday, emergency officials said.

The crash happened just before 5 p.m. on Highway 407 in Vaughan, Ont., where provincial police said a westbound tanker crossed several lanes of traffic, jumped a median and collided with an eastbound passenger vehicle. Both vehicles burst into flames and were still smouldering hours later.

In a video posted on Twitter, provincial police spokesman Sgt. Kerry Schmidt described the collision as “massive” and said the investigation would take some time. 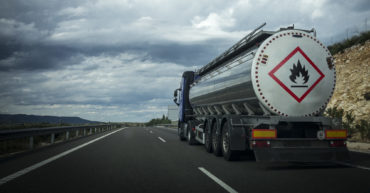 “I could see smoke from kilometres away as I was heading to the scene,” Schmidt said later during a media availability at the scene of the crash.

He said both vehicles were “completely consumed in flames.”

Schmidt confirmed Wednesday night the victims were a 41-year-old male truck driver from Brampton, Ont., and a 49-year-old man from Mississauga, Ont.

“When our firefighters arrived, they weren’t able to get close to it because of the heat coming off of it,” Zvanitajs said in a phone interview.

“But that type of heavy black smoke, and that amount of flame, would lead them to believe that it’s a liquid fuel product of some sort … gasoline or diesel would be the most commonly transported.”

Zvanitajs said crews used specialized foam to fight the blaze, and the flames were under control by 7 p.m. He expected firefighters would be on the scene for several more hours.

York Region spokeswoman Kylie Doerner said two people were pronounced dead at the scene and no one was taken to hospital.

Meanwhile, Mississauga resident Robert Kostiuk said he was returning home from work in Pickering, Ont., when he saw a vehicle ahead of him heading toward the median.

“When I saw it driving sideways, I knew that something was wrong,” said Kostiuk.

Kostiuk, who works for Ontario Power Generation, recorded the fiery crash on his dashboard camera and posted the video to YouTube. He said he’s never seen anything this bad.

The highway was closed in both directions between Keele and Dufferin streets well into the evening. Schmidt said he expected the westbound lanes to reopen overnight, but the eastbound lanes could remain closed until early Thursday morning.

Schmidt said there was some concern about fuel from the tanker spilling into a nearby waterway, and workers from the provincial Environment Ministry were assessing the scene.

He said the extreme heat from the blast has the potential to damage not only vehicles, but the road surface itself, which may need to be repaved.