ST. JOHN’S, N.L. – People in eastern Newfoundland reached for their shovels Monday morning as the region was walloped by the first major winter storm of the year.

Environment Canada issued storm warnings and special weather statements for the St. John’s region and areas north along the coast up to Gander, though Gander’s warning was lifted by around 11 a.m. 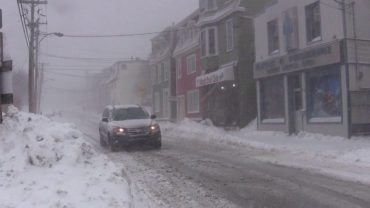 A car drives downs a snow-covered street in St. John’s on Wednesday, Jan. 2, 2019. Disgruntled St. John’s residents took to the streets early Wednesday afternoon to shovel away snow from a powerful storm, just before a second round of intense wind and snowfall began battering Newfoundland and Labrador. Travel to Newfoundland by air and sea was being disrupted after a winter storm dumped between 30 and 40 centimetres of snow in parts of the province. THE CANADIAN PRESS/Holly McKenzie-Sutter

Heavy snow, along with maximum wind gusts of 100 kilometres per hour, were expected to continue until around noon, making for treacherous driving conditions in some areas.

“Much of the eastern half of the island got a pretty snowy wakeup this morning, that’s for sure,” Environment Canada meteorologist David Neil said from Gander.

St. John’s was the high mark for snowfall, Neil said, with the city’s airport recording 40 centimentres of snowfall since Sunday afternoon.

Gander had recorded 19 centimetres of snow by Monday morning, he added, with an estimated 28 centimentres at Terra Nova National Park and about 30 centimetres recorded in Bonavista.

“A lot of folks I’m sure woke up this morning with some pretty good snow drifts, either in their driveways or on the sidewalks,” he said.

Public offices and schools across the region delayed opening or shut down for the day as people began digging themselves out.

The English School District announced closures across the St. John’s metro area for the day. Memorial University of Newfoundland and College of the North Atlantic also announced campus closures due to the weather.

Air travellers, as well as those planning to use ferries, were advised check the status of their flights and sailings before heading out.

Relief as the snowfall tapered off Monday morning may be short-lived, with another developing storm expected to hit the island with more snow on Wednesday evening, Neil said.

“We’ll get a little breather, but for the most part we’ll see another storm coming in short order,” he said.

This report by The Canadian Press was first published Jan. 6, 2020.