While spring rains and thawing have caused overland flooding of Biblical proportions, drain backups are also the bane of some insurers’ existence.

In multi-storey commercial and residential buildings, drain backups are the number one cause of damage, said Adam Bartman, co-founder of Reed Controls Inc., in an interview.

“Very often we see cat litter and wet wipes and feminine hygiene products being thrown down toilets,” said Bartman, a second-generation plumber who has run his own plumbing firm for 15 years. 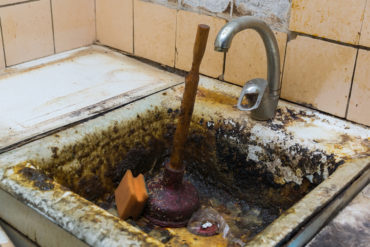 “In these high-rise buildings, there is a vertical pipe from the roof to the ground. In the vertical position, there is very infrequently blockages, but as soon as it changes direction horizontally, you get a lot of accumulation of grease,” Bartman explained.

“Somebody will be in their apartment and suddenly they hear the sink start gurgling and a minute later there is black water spewing out of their sink because the water has nowhere else to go. All of the people above them are using their kitchen sink and everything appears to be normal. The water is going away. Meanwhile the poor guy on the second or third floor is getting crushed by drain backup.”

Moreover, a faulty toilet or dishwasher on an upper floor can cause water damage to the floors below it, Reed CEO John Lancefield said.

“What we keep hearing everywhere we go is water is the new fire,” added Lancefield, commenting on the concept of property insurers bringing in standard policies that give incentives to clients to install systems capable of shutting off water remotely if there is a plumbing problem.

Bartman co-founded Reed Controls after having no luck finding products that could easily let users remotely shut off water in some multi-storey buildings such as apartment buildings.

“There’s a whole bunch of stuff that works well in a single-family home that has one shut off valve and turns off the whole house. But most commercial buildings are more complicated than that. There are hundreds of valves in various locations.”

Incidents such as drain backups and faulty appliances often cause damage on multiple floors, said Bartman.

“It often gets sticky and complicated because then you have the condo corporation or landlord’s insurance dealing with the resident’s insurance and there is a lot of administrative work and they are messaging me asking for reports and it gets very convoluted,” said Bartman.

“The tenant’s insurer is asking for reports but I can’t really give it to them because I wasn’t called by them. There are a lot of after effects from all this. It ends up being months and months of people waiting for insurance money to come in, they are displaced and it’s very chaotic.”

Based in Concord, Ont., north of Toronto, Reed makes networked devices that connect to plumbing valves. Those are designed to let building managers shut down water right away without waiting for a plumber to arrive.

A security guard or concierge could use an app on the phone to shut down the water supply either to the whole building or to banks of floors – for example 1 through 10 or 11 through 20, said Avi Moscovich, Reed’s vice president of marketing.

1 Comment » for How kitty litter can impact insured property losses