HALIFAX – Work crews were fanning out across parts of Atlantic Canada on Friday after a fierce winter storm blasted the region with hurricane-force winds that flooded coastal roads, knocked out power and lashed waterfronts with surging seas. 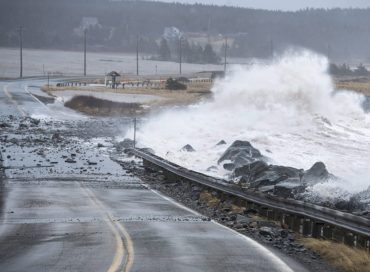 Waves pound the shore on a closed section of Highway 207 in Lawrencetown, N.S. on Friday, Jan. 5, 2018. Environment Canada says a cold air mass is settling in over Atlantic Canada as parts of the region continue to battle the remnants of a fierce winter storm. THE CANADIAN PRESS/Andrew Vaughan

Tens of thousands of people in New Brunswick, Nova Scotia and P.E.I. woke up in the dark due to power outages linked to winds that gusted up to 170 kilometres an hour at their highest in Grand Etang, N.S., as part of a system being dubbed a “weather bomb” on social media sites.

By 11 a.m. local time, Nova Scotia Power was reporting 2,000 outages affecting almost 83,000 customers, while NB Power was dealing with 140 outages that affected 16,000 customers. Both utilities had dispatched large crews throughout the area to continue the restoration effort as winds gusted to 80 km/h.

Dominic Fewer of the province’s Emergency Management Office said it was still too early to accurately assess the extent of the damage throughout Nova Scotia, but some roadways were washed out and others littered with debris due to the surge and heavy rains.

“There are some washouts and water on the roads – the damage is there, but we’re not really sure of the extent yet,” he said, adding that some roads around the popular Lawrencetown Beach were closed or detoured. “There could be some debris on the roads, but also there is also the wind impact and there could be some water in low-lying areas.”

The storm surge was also felt further down the coast in Shelburne, where Mayor Karen Mattatall said one of the main roads along the waterfront was submerged Thursday night as the powerful system was at its peak. She said the water on Dock Street had receded early Friday, but appeared to have cut away a chunk of sidewalk and left an assortment of flotsam including fishing gear and refuse.

“There is lots of debris on the street and sidewalk, like old lobster traps, that has to be cleaned away,” she said, as she awaited damage assessments from community officials. “It is apparent that there is some property that has sustained some damage.”

It appeared the roof of the fire department’s community centre was also damaged, but it wasn’t yet clear how bad it was.

Winds also whipped up seas that spilled onto roadways in Eastern Passage near Halifax and Lunenburg County, leaving rocks and debris strewn along streets and boardwalks.

A stretch of boardwalk at the Historic Properties on Halifax’s waterfront had also flooded around a large Canada 150 sign, while the surge overran a short causeway connecting the Armdale Yacht Club to the peninsula.

Pictures on Twitter showed scaffolding from the historic Lunenburg Academy laying in a heap on the ground as winds roared around it, while waves nearby pounded shorelines along the Atlantic coast.

The storm also closed schools for a second straight day in parts of New Brunswick, Nova Scotia and P.E.I., and was hampering air travel and ferry service in several areas.

The Halifax Stanfield International Airport schedule board was awash in delays and cancellations Friday, while St. John’s, N.L., was also reporting flight cancellations.

As winds pick up in Lunenburg-the scaffolding at Lunenburg Academy has collapsed. #weatherbomb #nsstorm pic.twitter.com/4DkUQZwz2b

In New Brunswick, crews began clearing away mounds of snow that began piling up when the slow-moving, low-pressure system moved into the area Thursday afternoon. The highest snowfall was recorded at Pokemouche, which got a staggering 58 centimetres, while Big River nearby got 50 centimetres of snow. Fredericton reported 25 centimetres of snow early Friday.

Linda Libby, a meteorologist with Environment Canada, said the system was expected to move toward Anticosti Island as it tracked up the Gulf of St. Lawrence near Labrador.