A January storm in southern Ontario and Quebec caused more than $95 million in insured damage, mostly from damage to personal property, according to estimates from Catastrophe Indices and Quantification Inc. (CatIQ).

The majority ($81.6 million) of the insured damage occurred in Ontario, with $13.7 million occurring in Quebec, Insurance Bureau of Canada (IBC) reported Tuesday. The combination of frozen ground, snowmelt and heavy rain from the storm led to widespread overland flooding, sewer backups and seepage.

Before the storm, overnight temperatures in southern Ontario rose to record-breaking highs of between 10°C and 15°C. The rain began Jan. 10, continued through the following day, and then turned to snow Jan. 12. In Toronto, 78 mm of rainfall was recorded. From Windsor to London, 60 to 70 mm of rain fell. The Ottawa Airport reported 34 mm of rain and 12 cm of snow and ice pellets. 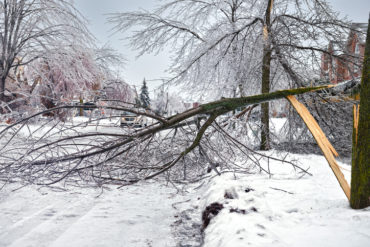 In Quebec, rain began in Montreal Jan. 11, when the afternoon high reached 6.5°C. Then came freezing rain as the cold front passed through. After midnight, freezing rain became mixed with ice pellets. The storm also brought a mix of ice pellets and snow before changing to snow, IBC said. In total, Montreal received 40 mm of rain, and 13 cm of snow and ice pellets. At the time, The Canadian Press reported that 125,000 Hydro-Quebec customers were without power after freezing rain and strong winds sent tree branches crashing onto power lines and caused havoc on the roads.

The snow and heavy rain led to widespread overland flooding, sewer backups and seepage. There were significant reports of flooded basements and multiple flooded roads, resulting in closures across southern Ontario and Quebec. Wind damage was also a factor, especially in the Niagara Peninsula. In Fort Erie, Ont., strong winds caused storm surges, which resulted in road closures in the town.

Kim Donaldson, vice president of IBC’s Ontario region, noted that while severe weather events are happening more frequently and with greater intensity, “in particular, storms with severe winds that cause flooding are becoming more common.”

Related: This is how much severe weather claims could cost in 10 years

Insured damage from floods, rain, snow and windstorms reached $1.3 billion in 2019, CatIQ reported last month. This compared to about $2 billion in 2018.

A recent report from the Insurance Institute of Canada said that since 2013, severe weather damage claims have averaged $2.1 billion a year, based on CatIQ data. That is expected to increase to $5 billion a year in 10 years, wrote Paul Kovacs, senior researcher with the Institute and founder and executive director of the Institute for Catastrophic Loss Reduction, in the report.