Ingredients are there for N.B. flooding, but too early to forecast: officials

FREDERICTON – Public safety officials in New Brunswick say people living in flood-prone areas of the province should be prepared for rising waters, but it’s too early to say what this year’s flood season will bring.

The province launched its annual River Watch Program on Monday, and officials say there is the potential for flooding along the St. John River again this year.

Meteorologist Jill Maepea said snow depth in the upper river basin is about 20 per cent greater than average right now. 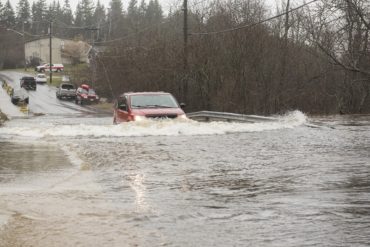 A vehicle drives through the flood waters of the St. John River on the only access road to the Dominion Park community in Saint John, N.B., on Wednesday, April 24, 2019. THE CANADIAN PRESS/Stephen MacGillivray

She said the long-term forecast for the next three months is for average temperatures that are slightly above normal and precipitation that is slightly below normal.

But Boisvert said the most important factors for flooding are daily temperatures and precipitation.

“The amount of snow is not a good predictor of flooding. Regardless of amounts there could be a significant flood, no flood at all, or somewhere in between,” he said.

Greg MacCallum, director of New Brunswick Emergency Measures Organization, said people should be prepared, and that includes having flood insurance.

“If folks are out there wondering if they are going to flood again, we can’t tell them at this point, but we can say you should always be prepared for that possibility,” MacCallum said.

New Brunswick has experienced a number of years of record flooding that have damaged homes and cottages and temporarily closed a portion of the Trans-Canada Highway.

The annual River Watch website is now online at https://www2.gnb.ca/content/gnb/en/news/public_alerts/river_watch.html

This report by The Canadian Press was first published March 9, 2020.