Ins and outs of travel insurance amid coronavirus outbreak

VANCOUVER – Travellers nervous about globe-trotting during the novel coronavirus outbreak may be eligible to receive a refund for cancelling their travels, say insurance experts, but it depends on the destination, their insurance policy and other factors.

“I think in any case of sort of an epidemic like this, it’s really an evolving situation and every day is different, something new happens,” said Joan Weir, director of health and disability policy for the Canadian Life and Health Insurance Association. CLHIA represents 99 per cent of the country’s life and health insurance companies, according to its website.

Travel insurers watch the unfolding situation very carefully, she said, and the association is frequently checking in with all its members about what they’re experiencing. 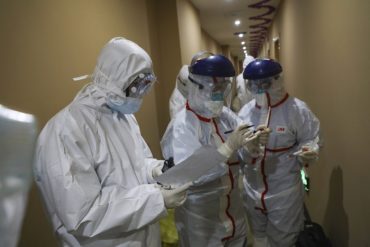 A medical worker in a protective suit writes on a tube after collecting a sample for nucleic acid tests from a suspected virus patient at a hotel being used to place people in medical isolation in Wuhan in central China’s Hubei Province, Tuesday, Feb. 4, 2020. Hong Kong hospitals cut services as thousands of medical workers went on strike for a second day Tuesday to demand the border with mainland China be shut completely, as a new virus caused its first death in the semi-autonomous territory and authorities feared it was spreading locally. (Chinatopix via AP)

There are now more than 31,000 confirmed cases of coronavirus, which originated in Wuhan, China, according to the World Health Organization.

The bulk of these are in China, where there have also been 637 deaths. Across 24 other countries, there are 270 confirmed cases and one death. There are five confirmed cases in Canada.

The WHO declared the outbreak a global health emergency in late January.

The Canadian government issued a Level 3 advisory for China, asking Canadians to avoid non-essential travel. There is only one higher level, which advises travellers to avoid all travel.

The government recommends people avoid travelling to Hubei Province, where Wuhan city is located. The province has recorded 22,112 of China’s 31,211 coronavirus cases, according to the WHO.

As soon as the Canadian government declares a Level 3 or 4 travel advisory, a person may cancel their upcoming trip and their insurance should cover any lost expenses, said Weir.

“You’d have to submit receipts,” she said, but travellers should receive refunds for flights, hotels and other costs.

Trips booked before the government issues these advisories are often covered by travel insurance, said an emailed statement from the insurance company RSA Canada.

“Trips booked after this point are not eligible for medical coverage or trip cancellation/interruption coverage.”

Allianz Global Assistance Canada, which declined to comment due to “how quickly the current coronavirus is evolving and the changing advisories” from Canada’s government and others, posted a notice on its website to customers about the outbreak indicating booking timing mattered for coverage eligibility.

People travelling to China whose trip cancellation benefits kick in if the government issues a Level 3 advisory would be eligible to submit a claim if they purchased insurance before Jan. 29, when the government issued its advisory, according to the statement.

For those who do qualify, it doesn’t matter whether their trip is next week or in six months, said Weir.

However, the destination matters. While 24 countries have confirmed coronavirus cases, Canada’s travel advisory applies only to China. That means a person who feels uncomfortable travelling to any of the other countries won’t be able to get a refund for cancelling their trip, she said.

That is, unless they purchased what’s known as cancel-for-any-reason insurance, she said, which does exactly what the name implies.

Those who haven’t purchased any travel insurance may still be able to secure a refund, Weir noted, as many major credit cards offer some kind of coverage.

“But it depends on which credit card you have and what the benefits are,” she said. “So it’s good to know what your credit card covers for trip cancellation, for trip health, all that.”

This report by The Canadian Press was first published Feb. 7, 2020.