The Insurance Corporation of British Columbia (ICBC) was justified in denying an insured’s claim for making a wilfully false statement in connection with a stolen vehicle, the province’s Civil Resolution Tribunal (CRT) has ruled.

ICBC determined the stolen vehicle was a total loss, but the insured was not entitled to compensation because he misrepresented the condition of the vehicle by stating it was in good working order before the theft. CRT vice chairperson Andrea Ritchie agreed with the public auto insurer, finding in a decision released Tuesday that “the vehicle was experiencing significant mechanical problems before the theft, which were evident” to the insured. 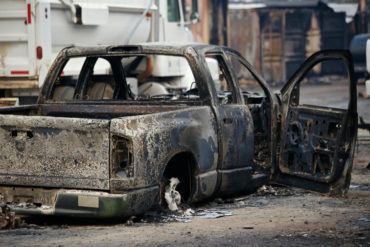 On Sept. 16, 2018, Fredrick Olfrey found his 2003 Ford Explorer Sport Trac was missing from where it was parked outside his home. He called police, who later found the vehicle burned out.

After filing a claim with ICBC, Olfrey provided a statement to the insurer Sept. 28 detailing the loss and the vehicle’s condition prior to it being stolen, noting that “mechanically the vehicle was very good”, “everything was working awesome except one light on the dashboard that was out” and “everything else worked… it just needed an oil change.”

An ICBC employee – identified as MH – performed a mechanical inspection. In his Oct. 30 report, he provided the opinion that the truck was “exhibiting obvious poor drivability symptoms such as pre-ignition, misfiring, overheating and transmission issues, such as slipping and noisy erratic gear shifting” before the theft and fire incident. He further stated that the engine failures would have been evident to Olfrey through the vehicle’s dash display, “followed by overheating and possible seizing of the engine.”

Olfrey argued that he did not experience any engine issue and questioned whether an inspection performed after a total loss can even be relied upon. He also produced statements from four friends or acquaintances, who each advised that they had been in the truck before it was damaged and there were no issues with performance. None of the statements were dated or provided dates in which the people rode in the vehicle.

“On balance, I place more weight on MH’s report than on the observations of the applicant’s friends that the vehicle appeared to be in good condition when they only occasionally rode it,” Ritchie wrote in Olfrey v. ICBC. “The friends were not clearly disinterested given their relationship with the applicant. Additionally, there is no mechanical evidence to contradict MH’s report, despite the applicant saying he spoke to ‘several’ qualified mechanics about the report.” The insured did not provide a statement or expert report from any mechanic to the tribunal.

“I find the vehicle was experiencing significant mechanical problems before the theft which were evident to the applicant,” the decision said. “I find that he failed to disclose those issues to ICBC and, as a result, ICBC denied his claims under section 75 of the Insurance (Vehicle) Act. I find ICBC did not act unreasonably in doing so.”

Ritchie dismissed Olfrey’s argument, which was that ICBC refused to compensate him for the value of his vehicle. The insured also claimed for reimbursement of insurance payments that were taken out of his bank account after his vehicle was written off. In total, Olfrey sought $5,000 in compensation. ICBC did not dispute the overpayment of premiums, and was ordered to reimburse the insured $110.