An online fundraising page for the woman, only identified as Desiree, says doctors at Vancouver General Hospital are operating on her while she fights life-threatening injuries.

Multiple media reports have identified the woman as Desiree Evancio. 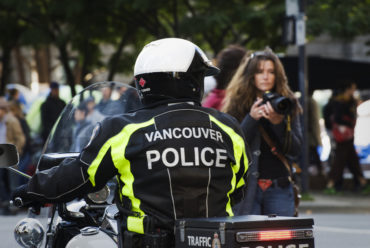 Vancouver police say a woman, whose name has not been released, was walking in the area of East Hastings Street and Jackson Street on Saturday around 12:30 a.m. when she was struck by a van carrying a cargo trailer.

Const. Steve Addison says the driver dragged the woman for several blocks before the vehicle came to a stop and the driver realized the collision had occurred.

Addison says police believe the driver was impaired by alcohol in some way and officers are investigating what role the impairment played, if any, in the crash.

He says police arrested and released the driver while the investigation continues to determine whether charges will be recommended to Crown counsel.

The driver is from the United States, but Addison does not know if he remained in Canada or has gone back to the U.S. at this time.

Police say the man would have had to be charged and have a bail condition requiring him to stay in the province in order to prevent him from leaving British Columbia.

“It’s affected greatly this victim and her family,” he says. “It’s affected the police officers who are working on this case. I can’t overstate how much of a tragedy it is.”

Ashley Danh, who says she is Desiree’s sister, wrote on the online fundraising page that her sister was set to undergo an eight- to 10-hour surgery on Wednesday to start the reconstruction of her face.

Danh, who was not available for comment through social media, adds she expects Desiree to be in the hospital for another six months to a year.

“We are all in shock that an accident as severe could ever happen and when it happens to the person you love and care for the most you are sometimes in disbelief,” she says.

More than $120,000 has been donated to support Desiree’s recovery so far.