Is this how much pandemic coverage costs?

Famed tennis tournament The Wimbledon Championships has been buying pandemic coverage at a cost of millions of dollars per year for nearly two decades. And it’s set for a claims payout this year, according to a data analytics company.

GlobalData, based in the United Kingdom, released a report saying that Wimbledon — considered the most prestigious tennis tournament in the world, as well as the oldest — has been paying for pandemic coverage since the SARS outbreak in 2003 at a rate of about £1.5 million per year, or about CAD$2.6 million per year.

That means organizers have paid about £25.5 million (nearly CAD$45 million) over the last 17 years. The report states that the tournament is set to receive a payout of £114 million, or about CAD$200 million by making claim due to the COVID-19 pandemic. The All England Club, which hosts Wimbledon, announced the tournament’s cancellation on Apr. 1.

“Wimbledon has shown it is one step ahead of most businesses by having insurance in place for current events,” said Ben Carey-Evans, Insurance Analyst at GlobalData, in the report. He further called the insurance payments “a very sensible investment.” 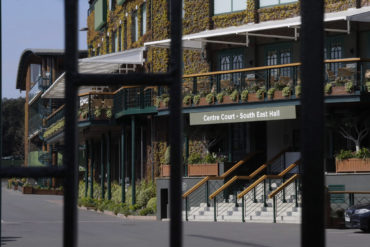 A general view through the main gates to Wimbledon as it is announced the Wimbledon tennis Championships for 2020 has been cancelled due to the coronavirus in London, Wednesday, April 1, 2020. The new coronavirus causes mild or moderate symptoms for most people, but for some, especially older adults and people with existing health problems, it can cause more severe illness or death. (AP Photo/Kirsty Wigglesworth)

Joseph Carnevale, president of the Insurance Brokers Association of Ontario and managing director of sales at Concord, Ont.-based Brokers Trust Insurance, agreed. “The fact that they had the availability of this product as an endorsement, however it was sold to them, is amazing,” he told Canadian Underwriter. “Credit to the people behind that organization that, when given the opportunity, they took it.”

There was probably at least one voice in board meetings questioning the wisdom of plunking down so much money for pandemic coverage, arguing that money could be better spent elsewhere, Carnevale pointed out. “You can bet those were the discussions happening in that board room.”

That’s how typical business leaders think — they analyze cost/benefit when it comes to their insurance coverage. “People make these decisions all the time,” Carnevale said. “Definitely a huge credit to the directors of Wimbledon who had the foresight and the dedication to continue to make that commitment to purchase that product when available.”

So will other sporting events — and all events generally — look to invest in a pandemic-related coverage going forward? Yes, Cary-Evans said. They’ll see the disruption, investment and payout as incentives. “This could see pandemic insurance move from being a niche product to an essential one for sports and music organizers.”

However, circumstances could change when every organization wants pandemic coverage as opposed to a select few, he warned. It may not be feasible to say it would cost £1.5 million for anyone going forward to have pandemic coverage. “Insurers will face challenges in pricing premiums due to a sharp rise in popularity and the significant level of risk attached to the product.”

The payout to the Grand Slam tournament — which crowned Novak Djokovic on the men’s side and Simona Halep as the women’s champions in 2019 — won’t cover all the revenue it would typically bring in. According to sports market intelligence firm SportCal, the grass-court event earns about US$160 million in media rights, US$151 million in sponsorship and US$52 million in ticket sales.

It will save money as well by not hosting a tournament. In 2019, about US$50 million in prize money was handed out, which won’t happen this year. Additionally, Cary-Evans noted, it will save money on not paying staff wages.

Still, this “represents a significant loss of income, despite the sizeable insurance pay-out,” he said. “Insurance represents damage limitation for the competition, and it will find itself in a much stronger position than most other events in the world during this period.”

More News
Related
What Intact is doing during COVID-19
Contactless payment in a pandemic: There’s an app for that
Insurers adding pandemic exclusions in commercial policies that go beyond just BI
Why now is a good time to press for auto reform

1 Comment » for Is this how much pandemic coverage costs?