Is this the next big emerging property claims threat? 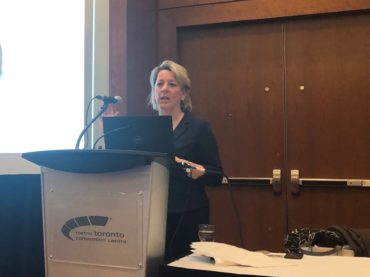 Lori Festarini, vice president of environmental services at Stantec, speaks at the OIAA Claims Conference in January 2020 about PFAS, its emergence in Canada and the risks posed to claims experts.

Polyfluoroalkyl (PFAS) materials are everywhere – and they could be the next big threat to property claims exposure, warned one expert.

Lori Festarini, vice president of environmental services at Stantec, spoke about the risks around PFAS at the recent Ontario Insurance Adjusters Association’s Claims Conference in Toronto. This material is found in many everyday items such as non-stick cookware, cleaning products, adhesives, water-resistant jackets, fast food wrappers and more. While versatile, heavy amounts can contaminate potable water.

It also just so happens to be used in firefighting foam called AFFF, or aqueous film forming foam. When fire crews respond to the scene of a fire and water isn’t enough to suppress the flames, they combine this substance with water. By doing so, however, the risk increases that these firefighting efforts could lead to tainting an area’s drinking water. PFAS is often called the ‘forever chemical’ because it doesn’t break down naturally in the environment.

Festarini’s talk  focused on the challenges claims professionals face when assessing the damage caused by putting out a fire. “I think that firefighting foam is probably one of the sources of PFAS that will affect the property space more than any of the other ones,” she said.

These chemicals are nothing new, having been around since the 1950s. But it’s only now emerging in Canada through firefighting foam. It’s common in the U.S. and Australia.

In Canada, Festarini pointed to the fire at the Rideau Valley Marketplace, a flea market near Smith Falls, Ont., in 2016. Toxins from the firefighting foam have shown up in the water wells of homes half a kilometre away, according to the CBC. More than two years after the fire, they’re still dealing with the fallout.

When arriving on a fire scene where AFFF was used, experts need to grab a sample for analysis. That’s because when the soil, surface water and groundwater are tested, it can be determined what amount of PFAS came from firefighting. In the case of contamination, it can be shown how much came from the foam versus other sources.

Because the substances can come from other sources, it’s important to always “be cognizant, depending on what type of loss you’re dealing with, that you have your consultant check the surrounding area,” Festarini said. “The firefighting foam being used has its own footprint. So you may be finding some PFAS, but it could be totally unrelated to what happened on your site.”

So, for example, take note if you’re not near an airport, military base or research centre – all of which generally have high levels of PFAS due to the nature of their operations – “because all of these are potential sources that may make you think your loss is bigger than it really is,” Festarini said.

Experts should take certain precautions when taking PFAS samples from a site, such as making sure they haven’t just eaten a hamburger from a fast food restaurant, or to make sure that they are not doing their work in a water-resistant jacket like Gore-Tex. Because PFAS is used in these kinds of common materials, it could influence the samples being taken. “You need to make sure you’re cognizant of those compounding sources and how to avoid them,” Festarini said, adding that engaging with a knowledgeable professional is a must. “There has to be proper characterization at the site so that you can manage the site correctly.”