Insurers are applauding the Ontario government for its commitment to improve flood mapping and to provide more money for municipal water infrastructure, measures that the industry hopes will reduce the risk of water damage to insured properties.

In a press release Thursday reacting to the province’s 2021-22 budget document, the Insurance Bureau of Canada says it is “pleased to see the government committing to improved flood mapping and to ongoing investments in the Ontario Community Infrastructure Fund for stormwater upgrades and flood mitigation.”

The budget document also includes a promise to provide up to $200 million a year for the Ontario Community Infrastructure Fund, originally announced this past January. OCIF provides funding for communities with populations of less than 100,000 towards water and wastewater infrastructure, as well as roads and bridges. 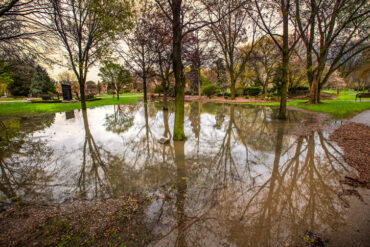 The federal budget is scheduled to be tabled Apr. 19.

Earlier in 2021, Stewart told Canadian Underwriter that the industry uses terrain models with a resolution of 30 metres. He made the comment in the context of an interview about the Canada-wide Task Force on High-Risk Residential Flood Insurance and Strategic Relocation. IBC is hoping the federal government will provide funding to improve flood map resolution to one metre, Stewart said at the time.

Five Canadian municipalities have participated in a pluvial flood modelling pilot project that aims to compare today’s 30-metre resolution mapping models to models with a two-meter resolution. The better-resolution models take into account the impact of things like storm sewers, dikes and dry ponds. A summary of the study, Improving Flood Risk Evaluation through Cross-Sector Sharing of Richer Data, was released in October 2019. Partners included the Insurance Bureau of Canada and the Canadian Water Network.

The industry normally uses digital terrain models with 30-metre resolution. IBC is aiming to improve that to five meters or better, the Canadian Water Network said in the 2019 report. The study of five municipalities (Windsor and Tecumseh, Ont., Edmonton, Regina and Halifax) found that computer processing time was faster using maps with five-metre resolution compared to maps with two-metre resolution.

The budget was also silent on auto insurance, which is often addressed in the annual spring budget.

In their 2019-20 budget, the Ontario PC government made several auto insurance reform proposals, including a “care-not-cash” provision. That proposal aims to have accident benefits pay for treatment rather than a cash settlement or legal fees.

In its auto reform strategy, dubbed Blueprint for Putting Drivers First, the Ontario government also promised in its 2019-20 budget document to increase the range of auto insurance coverage choices, which would let clients reduce their premiums. The government said at the time it plans to consult with industry on what these changes would look like in practice.

More News
Related
How budget cuts will affect flood risk mitigation
Flood repair: Why this condo owner had to pay strata fees for an uninhabitable unit
‘Much clearer picture’ of how Ottawa will address flood risk coming soon