BRITT, Ont. – From a helicopter flying over a smouldering swath of northeastern Ontario, Garry Harland has a clear view of where the firefighters under his command are working to extinguish a massive blaze that’s become known as Parry Sound 33.

The incident commander is focused on bringing the wildfire that has been burning for nearly a month under control, but progress takes time and a lot of effort.

“Fire is a momentum beast,” Harland told The Canadian Press. “You fight a fire sort of like you eat an elephant … in small bits.” 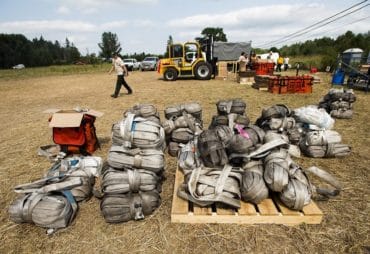 Used fire hoses are shown returned to base camp at the Parry Sound 33 forest fire which has burnt thousands of hectares of land near Britt, Ont., on Wednesday, August 15, 2018. THE CANADIAN PRESS/Nathan Denette

Ontario has seen more than 1,000 forest fires so far this year, compared to 561 in all of 2017. While the vast majority have either been extinguished or controlled, Parry Sound 33 remains one of the bigger blazes that is still active, and out of control.

In the past few weeks, the fire – which is more than 110 square kilometres in size – threatened the Trans-Canada Highway, forced evacuations in some communities and sent heavy, grey smoke over surrounding areas.

From the air on a clear, sunny day, the land that has been scorched by the blaze looked grey and ashy, making firefighters dressed in bright yellow suits easy to see as they worked with hoses.

Up to 556 firefighters have been working on the blaze since it began, according to the Ministry of Natural Resources and Forestry. Each crew is made of four firefighters and is responsible for about a kilometre of the fire perimeter, said Harland.

Crews who leave a base camp located in Britt, Ont., about 72 kilometres north of the town of Parry Sound, Ont., head out by helicopter to areas in the fire zone where they spend several days on the front lines, Harland said. They have to take equipment such as hose packs, water pumps and tool kits with them, as well as food and camping gear, he said.

“For the crews working on the lines, it is hot and dirty work,” said Harland, who has been helping fight fires for 35 years. “And some folks have worked damn hard on this fire.”

Some of the crews have come from as far as Mexico and the U.S. to help, Harland said.

“The Mexicans are very organized hard workers,” he said. “They are doing dynamite work out there for us.”

Crews recently saw their efforts pay off when the status of Parry Sound 33 went from “not under control” to “being held,” last week, pushing the blaze closer to being brought under control.

Harland said firefighters are now working hard to make sure the blaze is contained.

“Our focus this whole time has been on the northeast part of the fire, because it is where it is actively spreading,” he said.

Ian Staley, a fire behaviour analyst on Parry Sound 33 who helps decide where to focus resources, said crews have to continuously be aware of the risks of being on the front lines.

“They need to be really cognisant of the activity on the line where they are working to make sure a fire will not get behind them and outflank them,” said Staley, who used to be on the front lines himself in the past.

“They also need to be cognisant of falling trees, especially in this area because the trees are quite shallow rooted.”

For Harland, the coming days could bring major milestones.

“In the next week here, we expect to cross off big chunks of the fire perimeter,” he said. “The last thing we want is another fire like Parry Sound 33.”