Monday’s deadly rental van rampage in Toronto shows how quickly a vehicle can be turned into a weapon, but rental agencies are finding few clear options to prevent their property from involvement in such violent acts.

The urgency to find solutions is increasing, however.

The attack in Toronto that left at least 10 people dead and several injured is only the latest of a spate of vehicle attacks – including one in Edmonton last September – that have security experts grappling with solutions.

Efforts are further along in Europe, which has seen a rash of vehicle attacks across the continent. In the U.K., vehicle rental companies were asked to conduct tougher background checks following two separate van attacks in London last June. 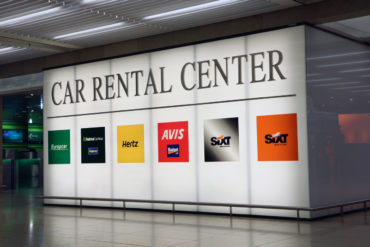 But rental agencies are still limited in how well they can screen customers, said Toby Poston, director of communications at the British Vehicle Rental and Leasing Association.

“People don’t come into rental branches wearing camo gear and stab vests and with that sort of glint in their eye. Quite often, these people just present themselves like any normal person.”

The British association is, however, looking to better co-ordinate with law and security officials to make it easier to share data. Poston said rental agencies wouldn’t have access to terror watchlists or the like, but could potentially feed information to authorities for better monitoring.

Related: How insurance responds when vehicles are used as weapons

Member companies are also looking to potentially institute other record searches like credit and criminal background checks, but even then there is no clear way to determine that a vehicle shouldn’t be rented, said Poston.

“You have to remember that a criminal record is not always reason enough to not rent someone a vehicle. And you have to be careful from a discrimination point of view.”

The accused in the Toronto van attack, Alek Minassian, did not even raise any red flags during a brief stint in the Canadian Armed Forces last year, a military source told The Canadian Press. 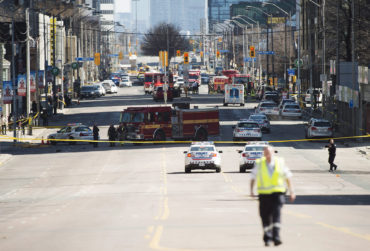 Yonge Street was closed in Toronto after a van mounted a sidewalk crashing into a number of pedestrians on April 23, 2018. THE CANADIAN PRESS/Nathan Denette

Toronto police said he rented the van from a Ryder rental location north of the city. The company said Tuesday it was fully co-operating with authorities, but declined to comment on its current security policies.

The Associated Canadian Car Rental Operators said government officials have yet to reach out to try to co-ordinate data sharing.

But any such efforts would be complicated, said vice president of government relations Craig Hirota.

“It’s challenging, how do you use that information so that it doesn’t infringe on existing rights of the individual and rights to privacy?”

The RCMP’s National Critical Infrastructure Team has been in contact with industry and sends out relevant information, Hirota added.

“We are in the loop with local and federal law enforcement when there are bulletins.”

He said the rental industry has long been concerned with fraudulent and criminal activity with rentals, but there are limited options for screenings.

“Vehicle rental agencies have been concerned with people doing bad things with rental cars since the inception of the industry. Obviously if there was a way to tell a renter was going to do something prohibited with your vehicle, we’d love to have that.”

It is also considering the establishment of a national accreditation scheme that could include training and formalizing policies such as no cash rentals. Companies also generally require business accounts for customers wanting to rent larger trucks, said Poston.

Elsewhere in Europe, Italy has implemented a real-time notification scheme with rental operators and a similar one is being developed in Belgium. Sweden is looking to introduce geofence technology that could connect with a vehicle’s on-board computer and limit its speed to a safe level.

The ease of carrying out such attacks, and the difficulties in detecting them are part of the reason for their rise, said Jeremy Littlewood, an assistant professor at Carleton University’s Norman Paterson School of International Affairs.

“It’s easy to replicate if someone gets that into their head,” said Littlewood.

Littlewood also questioned the effectiveness of background checks. He pointed out that Alek Minassian, now charged with 10 counts of first-degree murder for Monday’s attack, was not known to police.

“So far, police authorities are saying this person was not known to us. And so even if we had a database, our individual in this case is not going to show up from the police side.”

Even when perpetrators are known it is still difficult to stop an attack, said Littlewood, noting that Martin Couture-Rouleau was reported to be under RCMP surveillance when in 2014 he used a vehicle in Saint-Jean-sur-Richelieu, Que., to hit two members of the Canadian Armed Forces, leaving one dead.

Prevention has instead focused on more cement barriers, and heavy trucks at intersections for major events, but there’s no way to fully prevent this sort of attack entirely, said Littlewood.

“We have to recognize the limits of what can be done here, and the reality is we have to accept there are going to be some risks, and we can never entirely make ourselves into a zero-risk world.”