Cause of large B.C. hotel fire still under investigation

VICTORIA – Councillors in Victoria are being asked to authorize demolition of what remains of the Plaza Hotel after a fire that burned for four days in the city’s downtown last month.

The three-storey, 108-year-old vacant structure had been designated a heritage site and was to be transformed from a former strip club into commercial space and as many as 100 residential suites.

Victoria police say the intense blaze was suspicious but a search of the gutted shell of the building has wrapped up, although an investigation into the fire’s cause continues.’ 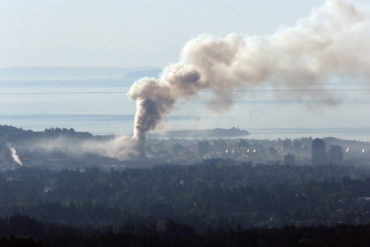 Thick smoke can be seen billowing from downtown Victoria, B.C., on Monday, May 6, 2019. More than two days after flames tore through a vacant hotel in downtown Victoria, smoke still lingers over the downtown core and city hall, which is barely a block away, remains closed. THE CANADIAN PRESS/Chad Hipolito

Those include a pair of round, polished granite columns that flanked the original hotel entry; some white glazed brick; structural timbers that were only slightly charred; several cast-iron structural columns; and glass prisms laid into the sidewalk on one side of the property.

A demolition application is to be considered by council on Thursday, and staff hope the salvaged elements can be worked into any new plans when Ocean Gate presents designs to council sometime this fall.

The Plaza Hotel has been vacant since 2013 but was managed by live-in caretaker Mike Draeger. He has not been seen since the fire.

A nearly week-long police search of the building concluded just over two weeks ago and control of the site was returned to Ocean Gate. (CFAX, CTV)