WINNIPEG – Some areas of Manitoba are watching rivers and lakes closely as the province warns rain could bring high water – or even flooding – after a devastating snowstorm more than a week ago.

Rain forecast for southeastern Manitoba on Monday meant a possibility of overland flooding in some areas. 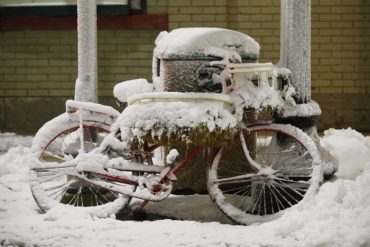 A bicycle covered in snow during an early winter storm with heavy wet snow which caused caused fallen trees, many on cars, and power lines in Winnipeg early Friday morning, October 11, 2019. Snow clearing crews were forced to hit the streets to clean up the damage. THE CANADIAN PRESS/John Woods

Manitoba Infrastructure issued a flood warning on Sunday for lakes within Whiteshell Provincial Park, and for rivers and creeks in the province’s south and southeast.

But the province also said that water levels in the Whiteshell had stabilized at or near record highs, and were expected to decline as long as there wasn’t too much rain.

A high-water advisory was also issued for parts of the Red River, including the portion that runs through Winnipeg.

The snowstorm that began Oct. 10 blanketed parts of the province in thick, heavy snow. That had largely melted in south-central and western Manitoba and runoff in most areas was slowing.

Manitoba Hydro said Sunday that about 2,000 customers were still without power. About 53,000 customers didn’t have electricity on the Thanksgiving weekend.

This report by The Canadian Press was first published Oct. 21, 2019.