Fancy kitchen faucets that start and stop with a wave of the hand–or a feline paw–have contributed to some curious flood claims. 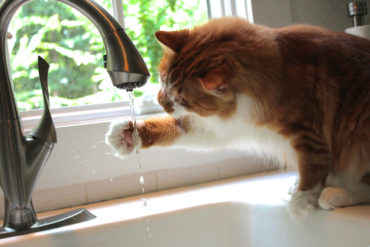 In his presentation about appliance fires and flood claims, Mazen Habash, president of forensic engineering firm Origin and Cause, spoke about the new (and rare) kind of risk presented by curious kitties last week at the Ontario Insurance Adjusters Association’s (OIAA) 2018 Claims Conference. A delegate asked him if he ever discovered a flood in a kitchen that was the result of the new taps that operate by somebody touching or waving a hand underneath them.

“I actually have,” Habash replied during the seminar Rise of the Machines: Appliance Fires and Flood Claim. “People have pets that jump on their counters.”

Habash said he adjusted two claims in which it was suspected that a cat triggered a flood claim by waving its paw under the tap. “I’m positive it was the cat that jumped on [the counter and] turned the water on,” he said. In one instance, “they had a dish cloth in the base of the sink and it just allowed the water to overflow the sink. There is a way of deactivating that waving feature, but people think it’s great, so they use it all the time.”

Other odd flood and fire claims that Origin and Cause has investigated include the improper use of plastic tubing to provide a water supply to a fridge. “When you go to the hardware store and look at that particular tubing, it actually says on the label, ‘Do not use for a refrigerator, as tubing is for either an ice picker or a water supply,’” Habash said. “Somebody went there and picked up the tubing when it should have been used for something else.”

Dryers, and the items people throw into them, have also triggered home insurance claims. “Items that should not have been in the dryer in the first place,” like a foam cushion, have ignited in the dryer, Habash said. “I’ve inspected a dryer where I’ve found the remains of nine butane lighters–not only in the drum, but in the base of the drum, underneath.”

The length of ducting running from a dryer out of a wall should be “two feet max, if that,” Habash said. He said in one claim he investigated, the dryer vent was about 10 feet long; it was flexible and stuffed up against the dryer and wall. There was “excess duct tape,” which prevents proper airflow, and the material was likely squished in between the wall and dryer, causing another reduction in air flow, thereby increasing the potential for a fire.

More News
Related
Adjuster solves mystery of fire in the firehall
Flash estimate for insured losses from Hurricane Hermine US$500 million: KCC
Why marijuana plant value is so important for adjusters
How business interruption claims could play out in the legal marijuana space