VANCOUVER – Several British Columbia communities are cleaning up and digging out after a storm swept over the southern part of the province on Friday, prompting flooding and landslides.

Local states of emergency were declared in the Cowichan Valley on Vancouver Island and in the District of Kent in the Fraser Valley. 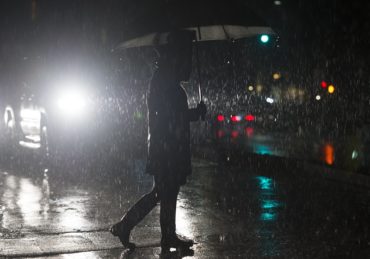 A pedestrian is seen crossing the street in North Vancouver B.C, Friday, January, 31, 2020. Another rain storm has hit the lower mainland with a expected rain fall of over 100mm in the last day of January. THE CANADIAN PRESS/Jonathan Hayward

Both areas were overwhelmed with up to 140 millimetres of rain that washed out or flooded major roads and forced the evacuation of dozens of people.

In the Cowichan Valley, dozens of people were evacuated because of flooding Friday night and early Saturday in the communities of Crofton and Duncan.

As many as 500 people in Hemlock Valley and at the Sasquatch Mountain ski resort were trapped with no alternate route out when a kilometre of road was taken out by a mudslide. Helicopters were offering to ferry people out at a cost of $150 per person.

The Transportation Ministry said it may be several days before the Hemlock Valley Road could be restored enough to allow for single-lane traffic.

Some phone lines were still down on Sunday including ones for police non-emergency numbers. Bell said on its Twitter account that it was trying to resolve the trouble.

E-Comm, B.C.’s largest emergency 911 call centre, said the Bell network outage was not a problem for 911 users, but it reminded people not to call 911 unless they had an emergency.

The border crossing between Abbotsford, B.C., and Sumas, Wash., was also closed Sunday because water overwhelmed the U.S. town of Sumas, leaving no route for drivers heading north or south.

A spokesman at the U.S. Border Customs Office at Sumas said no vehicles will be processed until the water recedes on the American side of the border. (News 1130, The Canadian Press)

This report by The Canadian Press was first published Feb. 2, 2020.