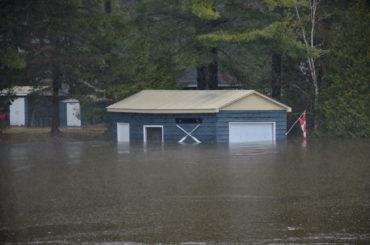 Despite being told flooding in Ontario’s Cottage Country back in 2013 was one-in-100-years event, area businesses and residents are cleaning up from a second and more widespread flooding incident in less than a decade.

Climate is playing a key role in flooding and it’s forcing everyone from adjusters to restoration companies to adjust their approach to assessing damage and lessening the fallout, said Shane Swinson, vice president, insurance portfolio at FirstonSite Restoration.

“As the climate becomes a little less predictable, we’re seeing longer winters and colder sparks of winter followed by warm weather,” he added. “You have the excess of water that river and lakes haven’t been used to.”

When a flood hits, claims adjusters are facing a number of challenges upfront.

“Occupancy is a challenge with seasonal homes – there can be delays in discovering and reporting damages based on how frequently the seasonal home is visited by the policyholder or a caretaker,” said Mike Koch, Kitchener, Ont.-based national property and catastrophe manager at Crawford & Company (Canada) Inc.

In Bracebridge, Ont., cottagers were told to stay away until water levels receded. On one hand, that’s helpful to local crews trying to clean up, and it keeps people out of danger. However, delays can hinder loss mitigation and add to issues around contamination and mould.

Location is another issue – remote areas may have a small number of contractors on hand, while a property that doesn’t have year-round access can mean a time limit on restoration efforts before winter sets in again.

“The key for claims adjusters handling these losses is to get notice of a loss as early as possible so that an assessment of the damages can be completed and remediation efforts undertaken,” Koch said.

Seasonal homes are also markedly different from one’s main property. Newer cottages aren’t built so close to a body of water while older ones were before modern rules were put in place, making them more susceptible to water damage. They can also range from rustic cabins to something resembling newly built homes in major cities.

“Each presents its own challenges for adjusters as they try to restore the properties to their pre-loss condition,” Koch said adding that adjusters will also likely find recreation vehicles and equipment at the cottage, and homes aren’t always up to building code, “which can be a challenging and expensive process.”

And as challenges around intermobility persist, Koch admitted “there are times when our response can be slowed down as we work through the licensing process.” But technology is helping, from drones to aerial maps that provide better real-time views.

“Technology is always playing a big role,” Swinson said, whether it’s making it easier to see damage in inaccessible areas or being able to quickly send videos and photos of the damage and restoration process.

More News
Related
Claims professionals speak out amid allegations of contractors providing insurance advice
Contractors know their role: Restoration contracting firms speak out
How much it cost the industry when baseball-sized hail hit western Canada
Why marijuana plant value is so important for adjusters

1 Comment » for The challenges of assessing seasonal home damage