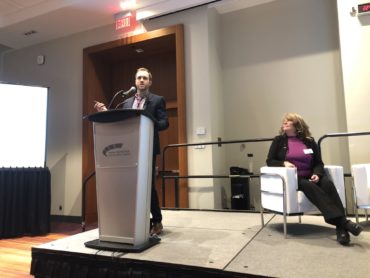 Rob Holmes discusses the challenges adjusters face when handling an older sexual abuse case, as Teresa Drijber looks on, at the CICMA/CIAA Ontario Chapter’s Joint Conference in Toronto on Jan. 21, 2020.

Allegations of sexual abuse have spiked in recent years, creating a new wave of complex insurance claims. Adding to that complexity is dealing with the wave of reports about incidents that took place decades ago.

Holmes said there has been a 92% increase in the number of reports made to police about an incident that took place more than 10 years ago. He said the first hurdle in handling such claims is figuring out which insurance company was providing coverage at the time.

Teresa Drijber, director of claims with the Ontario School Boards’ Insurance Exchange (OSBIE), confirmed that tracking down insurers is one of the specific, unique challenges her group faces with older claims. OSBIE came in place in 1987, she explained, so many cases are coming forward before its time. The group has often been tasked with helping school board track down insurers from before then.

It is also a complicated task to locate the insurance policies, she said. Ontario school boards have gone through three rounds of amalgamation since 1968, and French boards have been created since then. What’s more, the insurance industry itself has seen its fair share of mergers and acquisitions over the decades. “It wasn’t a digital world back then,” as Drijber observed.

Still, while it may be hard to find the policy on paper, Holmes noted that other documentation can be used to prove a policy was in place, such as financial records of paying premiums, or statements from brokers about coverage. “The onus is on the policyholder to produce evidence that the coverage exists,” he said.

“If the abuse has occurred over several policy periods, you may need to track down those other insurers if the pleadings trigger some claims made,” Drijber explained.

Even if policy coverage if found, there’s another issue — finding witnesses. “The biggest hurdle by far in these very old cases from the ’60s, ’70s and ’80s is being able to track down witnesses and even the involved parties,” Holmes said.

In some cases, Drijber said, many of those key people have died. In such circumstances, investigators might rely on yearbook information, or check to see if any criminal proceedings were held following the incident.

So let’s say you have found the insurers, the policies and the witnesses. There’s one other challenge: what’s the standard of judgment?

“People are judging you on today’s standards, not the standards that were there in the ’60s,” Drijber said. “Sexual harassment policies didn’t come into place until about the mid-’80s.”

Other safety measures and precautionary actions that exist today weren’t on anyone’s radar back then, added Holmes. “There was no police check, no second screening back then. So how do we establish today that what we did back then was reasonable under the circumstances? That might be one of the biggest hurdles.”

As for policy coverage, sexual assaults have moved out of being covered under errors and omissions. Sexual assaults are now typically found under directors and officers coverage, experts said in the August 2019 issue of Canadian Underwriter.