A winter storm in late January that brought snowfall, freezing rain, rain and strong winds to eastern Canada caused over $39 million in insured damage, according to Catastrophe Indices and Quantification Inc. (CatIQ).

Most of the damage occurred on Jan. 24 in Quebec, New Brunswick and Nova Scotia, and was caused by flooding and strong winds, the Insurance Bureau of Canada (IBC) noted in a press release Tuesday. The storm from Jan. 23 to 25 caused insured damage of about $26 million in Quebec, over $11 million in N.B., $2.1 million in N.S. and $270,000 in Prince Edward Island. 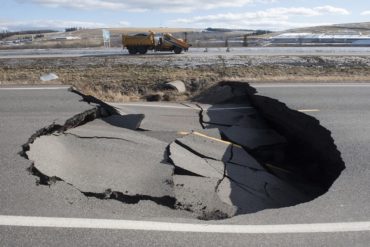 Riverview Drive East remains closed due to it washing out during Thursday’s rain storm in Sussex, N.B. on Friday January 25, 2019. Heavy rains caused flash flooding on Thursday night in the town. THE CANADIAN PRESS/Stephen MacGillivray

Strong winds in N.S. and N.B. resulted in widespread power outages. NS Power reported 12,000 customers without power, while NB Power said 5,300 customers were without power. In Moncton, eight people had to evacuate an apartment building after strong winds ripped off part of the roof. Heavy rain also resulted in significant flooding in many regions of southern N.B., which led to evacuations and road closures.

There were reports of submerged vehicles in Miramichi, N.B., and multiple reports of road flooding in Montreal. About 42,000 Hydro-Québec customers were without power, as were many residents in the Ottawa region.

The Canadian Press reported at the time that dozens of people had to be evacuated from about 30 homes late Jan. 24 due to flash flooding in riverfront areas around Sussex, N.B., in the wake of torrential rains and strong winds. Several roads were closed due to deep, standing water. There were also reports of wind gusts of over 100 kilometres per hour in parts of Nova Scotia, reaching 108 km/h near the Halifax airport. Most power outages were caused by high wind gusts blowing trees and tree branches onto power lines and damaging equipment.

IBC is advocating for increased investment from all orders of government to mitigate future impacts of extreme weather and building resiliency to its damaging effects. This include advocating for new infrastructure to protect communities from floods and fires, improved building codes, better land-use planning, and incentives to shift the development of homes and businesses away from areas of highest risk.

IBC also estimates that Canadian governments pay out $3 to recover public infrastructure damaged by severe weather for every dollar paid out in insurance claims for homes and businesses.