A severe earthquake in the Montreal area could cause between $10 billion and $30 billion in economic losses from fire damage, according to a new study from the Institute for Catastrophic Loss Reduction (ICLR).

“This loss would be virtually fully insured and would have a very significant impact on the Canadian insurance industry,” said the report, Fire following earthquake in the Montreal region, released Tuesday. “Fire losses would come on top of shaking and other losses, which would be insured to a lesser extent. A leading global reinsurer has stated that losses of this magnitude would likely result in failure of some insurers, would entail secondary and contingent losses, and could conceivably lead to financial contagion.” 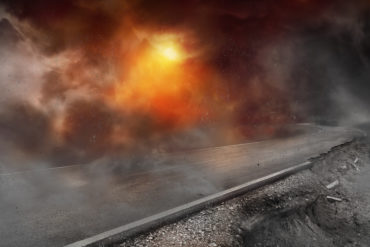 In a 2017 report, in-house catastrophe modelling from Swiss Re estimated that a magnitude-7.3 quake near Quebec City could result in total losses to residential property alone of $10.6 billion. However, with an only between about 3% and 4% of Quebec homeowners with earthquake insurance, only $0.48 billion would be covered by insurance. A magnitude-7 earthquake in Montreal “is probably going to cause an economic loss anywhere between $50 billion and $100 billion,” Philipp Wassenberg, former president and CEO of Munich Re Canada, said at the CatIQ Connect conference in February of this year.

“Accounting for fire department response, water system damage, weather and other conditions, the growth and ultimate final burnt area of fires are estimated to result in median losses of between $10 billion and $30 billion,” ICLR said in the report. These are median estimates; there are smaller probabilities of greater or less damage and the range is a function of the specific earthquake scenario, time of day, weather and other factors.

In Canada, homeowners’ policies typically do not cover earthquake damage; an endorsement is needed. But a standard policy will generally cover losses from fire following a quake.

Only an estimated 3-4% of Quebec homeowners have earthquake insurance, compared to a take-up rate of 65% in the British Columbia cites of Vancouver and Victoria, according to industry estimates. There is also an estimated 5-15% likelihood of a Magnitude-7 earthquake in Quebec in the next 50 years. “It is inevitable that a major earthquake will eventually strike in Quebec,” ICLR added.

According to the report, strong shaking in the Montreal area – home to about 10% of Canada’s population – would lead to hundreds of ignitions; breaks in water supply and damage to fire stations would compromise the capacity of firefighters to suppress the fires. Extensive damage from strong shaking would be accompanied by significant destruction due to fire.

To assess the risk of fire following earthquake and identify opportunities to reduce the risk, the study looked at possible impacts from three realistic earthquake scenarios – a magnitude-6.5 event centred in downtown Montreal and two magnitude-7 events (one to the northwest and the other to southwest of the city). “These scenario earthquakes, it was found, would lead to very strong shaking in the study area, resulting in hundreds of breaks in the water distribution systems and hundreds of fires,” the study said.

The expected losses, however, could be reduced significantly through investments in an auxiliary supply of water for firefighters, seismic retrofits to fire halls and other loss prevention actions. “Many losses are preventable if we invest in resilience,” ICLR said.

“This research found that Montreal-area fire agencies are very advanced, well-equipped and modern in their organization, methods and tactics,” commented Paul Kovacs, ICLR’s executive director. “But even so, a large number of simultaneous fires caused by an earthquake could overwhelm fire services unless municipalities take action before a major earthquake strikes. The good news is that there are several measures fire departments located in the study area can take.”

The report was prepared by Charles Scawthorn, an authority on managing the risk of fire following an earthquake. He also authored the 2001 ICLR study Assessment of Risk due to Fire Following Earthquake Lower Mainland British Columbia and studies assessing San Francisco, Los Angeles and Tokyo. The most recent report was sponsored by SCOR Reinsurance Group, Desjardins Insurance, Aviva Canada and iA Financial Group.