How much of the Quebec flooding is insurable?

About one in three Quebec homeowners have overland flood coverage, but that number could be much lower in areas affected by recent floods.

In the Montreal suburb of Ste-Marthe-sur-le-Lac, Que., waters from Lake of Two Mountains breached a dike at about 7 p.m. Saturday. Soldiers, firefighters and police patrolled the streets and pounded on doors to get homeowners to leave, The Canadian Press reported earlier.

It is too early to tell what the insured losses will be, Insurance Bureau of Canada spokesperson Pierre Babinsky said Monday in an interview. 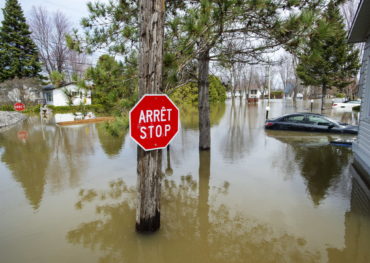 The Quebec government reported Monday that province-wide, 6,422 residences were flooded. Babinsky noted that figure is not a cumulative total – meaning there could be more homes with flood damage where the water has receded.

Most homeowners affected by Saturday’s dike breach probably have not filed claims yet, Babinsky suggested.

IBC does not track which affected homes are insured, but in 2017, the takeup rate in Quebec for flood insurance was about 33%. The IBC does not have more recent take-up rates.

“Those are likely people at low or medium risk,” said Babinsky. People in areas which are flooded on a continual basis may not qualify for flood insurance, he added.

In Ste-Marthe-sur-le-Lac, Que., more than 5,000 residents were forced to grab what they could, including pets, and flee as waist-high water filled their streets and homes on Saturday, CP reported. Another 1,500 people were evacuated the following day.

Premier Francois Legault visited the scene Sunday and announced $1 million in immediate funding to the Red Cross to ensure the evacuees’ immediate needs are met. He said it was “almost a miracle” that everyone was safe.

The dike-breach brought to 5,584 the total number of flooded homes in Quebec, with some 7,566 people forced to evacuate.

Canada’s third most expensive catastrophe – measured by insured losses – was the June 2013 floods in southern Alberta. Flooded areas included downtown Calgary and the town of High River. At the time, overland flood coverage was generally not available in Canada.

Insured losses from the 2013 floods were nearly $2 billion (mostly from sewer backup) but economic losses were about $6 billion, IBC reported earlier. Ranking first and second were the 2016 Fort McMurray, Alta wildfire and the 1998 ice storm.

Unlike Britain and the United States, Canada does not have a national backstop for overland flood insurance.

“We have been over to the U.K. to look at Flood Re model and the federal government has also been over to look at it,” IBC CEO Don Forgeron said April 2 during Swiss Re’s Canadian Insurance Outlook Breakfast.

“In all the jurisdictions we have looked at, where they fail is with the high-risk properties. That’s where the vast majority of their losses come from, and the question becomes: how do you price that? If it’s not full risk-based pricing, who pays it? And how is it paid? That’s usually where these programs fall down and that’s what the federal government has asked us to take a look at in terms of some sort of high-risk pool.”