TORONTO – Aleksandra Kozhevnikova doesn’t remember being hit by the van that careened through north Toronto and mowed down pedestrians on a busy thoroughfare last April.

Nor does the 92-year-old woman, one of the 16 injured who survived, want to talk about the attack that killed 10 people and robbed her of the independence she so valued, her son, Vadym Kozhevnikov, said. 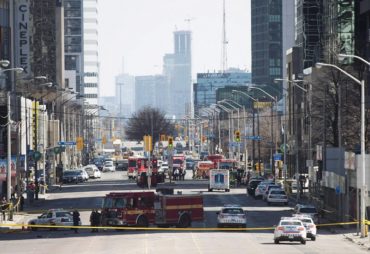 First responders close down Yonge Street in Toronto after a van mounted a sidewalk crashing into a number of pedestrians on Monday, April 23, 2018. THE CANADIAN PRESS/Nathan Denette

Before the incident, the retired grandmother lived alone, led an active life and largely took care of herself, Kozhevnikov said in a recent interview. A year later, she requires constant care from a personal support worker and can’t walk more than a few steps without assistance or switching to a wheelchair, he said.

And though she’s been told what happened, Kozhevnikova avoids any reminders, her son said. “She is very, very sensitive now, she can start crying . . . she worries about everything,” he said.

His mother even cast aside a prized red walker she got a year or two before the attack and often took with her to run errands, he said, because it stirred up too many emotions.

The brazen daytime attack that played out on Yonge Street on April 23, 2018, sparked a wave of fear and grief in Toronto and beyond, with some saying the city would bear permanent scars.

Police allege Alek Minassian deliberately drove a rental van onto the crowded sidewalk. The 26-year-old is charged with 10 counts of first-degree murder and 16 counts of attempted murder, allegations he will face in a trial scheduled to begin next February.

A year later, the more than $4 million raised in support of the victims and their families have been disbursed, and consultations are underway to build permanent memorials.

While some wish to avoid memories of the incident, families and communities across the city are marking the grim anniversary with events dedicated to those they lost.

A service will be held at a Toronto church to honour Munir Najjar, an 85-year-old Jordanian citizen who was visiting his children in Toronto with his wife when he was killed in the attack, said Harry Malawi, a family friend and president of the Jordanian Canadian Society.

Najjar’s wife has been in and out of the city in the last year and their son, a musician with the Canadian Arabic Orchestra, has returned to work, Malawi said. “They’re trying to live their life, they’re trying to move forward,” he said.

Marking the milestone is key to ensuring those who lost their lives are not forgotten, he said. “It may bring, on one hand, bad memories but it also brings healing thoughts,” he said.

A ceremony is also planned at the Buddhist temple that Renuka Amarasingha, another victim of the crash, attended weekly, said Rev. Ahangama Rathanasiri, chief monk at the Mahavihara Buddhist Meditation Centre.

Amarasingha, 45, was an active member of Toronto’s Sri Lankan community and a single mother. Her son Diyon, now eight, was taken in by family friends and continues to attend Sunday school at the temple, Rathanasiri said.

Manjula Wickramaratne, a family friend who takes Diyon to the temple each week, said the boy is doing well and has reconnected with his father. The father, who lives in Montreal, is in the process of working out a custody arrangement, she said.

Thousands of people donated to an online fundraiser for the child, for a total of nearly $360,000. A note on the fundraiser page dated a few weeks after the attack said the organizers were working through the “legal formalities” of setting up a trust for Diyon.

The last year has involved legal battles for several of those hurt or grieving as a result of the attack.

Three people who were injured – Amaresh Tesfamariam, Catherine Riddell and Amir Kiumarsi – have filed lawsuits against Minassian, as has the family of Anne Marie D’Amico, who was killed in the crash.

The lawsuits, which have not been tested in court, are seeking millions of dollars from Minassian and Ryder Truck Rental Canada, alleging the devastating injuries and deaths on that day were due to an intentional act by Minassian and negligence on his and the rental company’s part.

The lawyer representing the D’Amico family has said that any money his clients may be awarded would be donated to the Anne Marie D’Amico Foundation, which supports women who are victims of violence.

Kozhevnikova, meanwhile, was locked in a dispute with her insurance company, which was withholding payments because it contested the gravity of her injuries, her lawyer said.

The matter seemed poised for resolution recently after medical experts hired by the company deemed her to be “catastrophically” injured, Michael Taylor said. Kozhevnikova, who suffered neck and spinal injuries, is “as catastrophic as catastrophic can ever get,” Taylor said in a recent interview.

The medical designation should raise her insurance coverage limit to $1 million from $65,000, he said. Though Kozhevnikova does not fully grasp the issue, the outcome is a “huge relief,” her lawyer said.

Overall, Kozhevnikova has remained positive, though her moods and her ability to communicate can be erratic, he said.

– With files from Liam Casey