FORT MCMURRAY, Alta. – Deadlines have been extended for hundreds of insurance claims that remain unresolved more than two years after a wildfire dubbed “The Beast” tore through Fort McMurray and surrounding areas in the Regional Municipality of Wood Buffalo.

“This is unprecedented, not just for the people of Wood Buffalo, but for our industry,” Bill Adams, with the Insurance Bureau of Canada, said Wednesday. 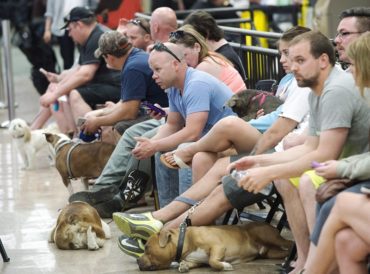 Evacuees from the Fort McMurray wildfires wait to file insurance claims at a shelter in Lac la Biche, Alta., on Friday, May 6, 2016. THE CANADIAN PRESS/Ryan Remiorz

“We’ve never dealt with an event nearly of this magnitude.”

The ferocious fire in May 2016 consumed 10 per cent of the buildings in the northeastern Alberta city and forced 88,000 people from their homes for at least a month.

With $3.7 billion in insured damage, the bureau has pegged the fire as the costliest disaster in Canadian history.

Legislation sets out a two-year limit for insurance claims to be resolved, meaning the deadline for affected Wood Buffalo residents passed earlier this month.

Normally, that would be more than enough time, Adams said. But insurers had to be flexible in fire’s aftermath.

“Individual insurers recognize that given the magnitude of the rebuilding, it’s just physically not possible for all claims to be resolved within a two-year period,” he said.

As of May 10, 97 per cent of residential claims had been resolved. Some 900 are outstanding, but 85 per cent of those have been granted extensions – some by as much as a year.

The courts are another avenue for recourse, but Adams could not say how many people have had to resort to that option so far.

“I heard loud and clear that our work in Wood Buffalo was not done,” he said.

Through the Superintendent of Insurance, the Alberta government urged insurers to allow more time for claims to be worked out.

“I’m pleased to report all insurance companies have answered our call,” Ceci said.

“I truly appreciate the commitment by insurance companies to extend the limitation period and I appreciate the support the insurance industry has provided to the people of Fort McMurray and Wood Buffalo since the very beginning.”

Mayor Don Scott, who represents the area, said in a statement that the extensions are a positive step for residents who are still slogging through their insurance claims.

“I encourage anyone with an outstanding insurance claim to contact their insurance company immediately to find out if they are willing to provide an extension, and if they experience any difficulty, they should contact Alberta’s Superintendent of Insurance,” he said. “I would also encourage them to contact a lawyer about filing a statement of claim to preserve their rights.”