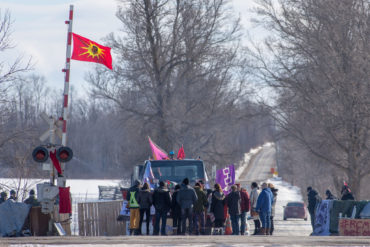 Supporters stand with protesters during a rail blockade in Tyendinaga Mohawk Territory, Ont. on Monday, Feb.17, 2020, in solidarity with the Wet’suwet’en hereditary chiefs opposed to the LNG pipeline in northern British Columbia. THE CANADIAN PRESS/Lars Hagberg

With railway disruptions across the country approaching the two-week mark, so grows the likelihood of insurance claims as a result. Most likely to be hit hardest is the retail industry, according to a pair of experts, due to the time sensitivity of many of its products.

To make a claim, there has to be physical damage of some kind – whether it’s to a product or premises. Something being delayed, however, would not typically be covered, explained Brad Cox, Crawford & Company (Canada) national transportation industry leader and branch manager for transportation and marine in Mississauga, Ont.

So, for example, fruits and vegetables with a shelf life sitting in a shipping container could spoil and a client could then lean on their policy. On the flip side, say, new vehicles coming from overseas set to be sold in Canada may be parked at a port until they can be delivered. The dealership’s products haven’t been damaged, so making an insured claim would be unlikely. “In some cases, simple ‘delay’ would not be considered as a covered loss under the policy,” Cox told Canadian Underwriter.

Take, for example, a manufacturer in Montreal. The blockade has raised concerns of a propane shortage in Quebec. If the shortage results in the manufacturer unable to provide sufficient heating for the building and a pipe freezes and bursts, then a first-party business interruption claim could follow. “It’s not the blockade that caused this, it was a frozen water pipe,” Jarvie said.

A financial loss may not trigger business interruption coverage or extra expense coverage, he added. Businesses have the option to move their goods by air or road instead. “So there could be ‘extra expense,’ which is another type of coverage available to businesses,” Jarvie said. “But, usually, there needs to be an insured peril to create a claim. There needs to be, in most cases, damage to property or a government order prohibiting access to property.”

For companies that are providing the service of moving products or, in the case of Via Rail, people across rail lines that now can’t, they will have to prove there was an impact on their business due to the protests. That type of language would have to be written into their policy but it’s not something that comes standard.

“In some policies, civil commotion is excluded. But then you get into what is the definition of ‘civil commotion.’ Is that how this would be classified? I guess that’s open to interpretation,” Cox said. “Every policy is different, though. You can always write it back in through an endorsement. It’s all going to be policy-specific when it comes to what claims are eventually submitted.”

Jarvie would be surprised if claims were made based on financial loss. “It would only be under very specific policy-driven issues where a company has asked for and paid a premium to obtain very specific coverage for these types of events,” he said.