What vulnerabilities are getting in the way of insurance? 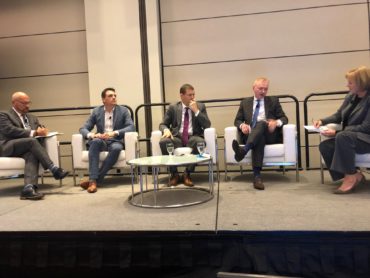 Insurance leaders are aware they’re not moving fast enough to keep up with change, be it around technological or customer expectations. But, as they said at a recent summit, they have no choice but to figure it out.

For Pat Van Bakel of Crawford & Company, he told attendees of the recent Canadian Independent Adjusters’ Association Claims Summit in Toronto that the industry’s biggest vulnerability is moving fast enough to meet client expectations of offering a differentiated service.

“If we can’t bring people and technology together to provide a quicker resolution of claims with an experience that is far superior to what we deliver today as an industry at a lower cost, then we’re in trouble,” he said as part of a fireside chat with other industry leaders.

Intact’s Patrick Barbeau agreed that a slow-moving pace will only hold the industry back. “We’re not moving fast enough in bringing technology and data at one wave to streamline the process and be more efficient in delivery,” he said.

However, that doesn’t mean getting a bunch of machines in there to do the work and dump the humans. Rather, “it’s supporting our people to make the best decisions and focus on the human side of what we do and be much more efficient,” he explained.

All of this is part of adapting to new realities, said Lovel Vining of Marsh Canada. He said his brokerage has made it clear that technology is going to be a big part of how it does business going forward, whether it’s making communication with clients easier or automating some administrative functions to free up people’s time to focus on other important areas of the business.

The industry also needs to build on existing relationships by taking the time to listen to clients. It’s something everyone in the industry can be better at doing.

“They know their businesses. They know their fields of operation better than anyone else. If we don’t listen to them, we’re not going to be able to anticipate what they’re looking for,” he said. “If you don’t do those things, you become vulnerable.”

Issues also extend to the people aspect and attracting the best. It’s a different time now, Vining said. Gone are the days when everyone arrived and left at specified hours, for example. “Millennials have a different view of the world,” he said. “It’s the ability to adapt to their work model. It’s a different work ethic.”

Moderator Monica Kuzyk of Curo Claims asked if the panellists have changed how they interview candidates. Are they now putting more emphasis on behavioural questions over technical ones? Yes, answered Van Bakel.

“The behavioural competencies are the ones that are more ingrained in our personalities and are the ones we need to hire for,” he said.

Furthermore, the industry needs to be less risk-averse and encourage people to think more openly, Van Bakel added. “In a lot of ways, we’re our own worst enemies because we put people in certain roles and we box them in, in terms of how to do their jobs.”

Make risk-taking a part of the culture, he encouraged. When meeting with employees, talk about risk and especially failures in a way that is constructive rather than destructive. “Today, we think of failure as a terrible thing. That creates that very risk-averse and change-averse population in our industry that we have to overcome,” Van Bakel said.

Everything is centred around talent for Bernard McNulty of Allianz. “It’s who’s available, who are we hiring, what are we doing with those resources?”

He’s on the lookout for those who are mobile and can easily pick up and move if necessary. “If we can find people outside of the sector, like an engineer or hire a lawyer from another space, that’s great,” he added.