What makes #MeToo claims so tricky to handle 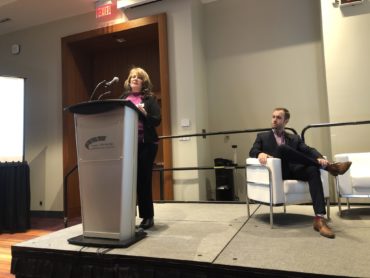 Teresa Drijber discusses the effect of sexual assault allegations on insurance claims, as Rob Holmes looks on, at the CICMA/CIAA Ontario Chapter’s Joint Conference in Toronto on Jan. 21, 2020.

The #MeToo movement has sparked a sharp increase in the number of victims coming forward. As a result, organizations are finding themselves caught up in insurance claims. For claims managers and adjusters, according to experts, that means handling the matter in ways you wouldn’t handle other cases.

What’s unique about a #MeToo claim is that three sides are involved. First, there is the victim as the plaintiff. Then there are two defendants: One is the accused; the second is the institution that is being sued for not preventing the abuse from happening, said Rob Holmes, senior general adjuster with Crawford & Company (Canada) at the Canadian Insurance Claims Managers’ Association/Canadian Independent Adjusters’ Association Ontario Chapter’s Annual Joint Conference in Toronto recently.

Adjusters will often handle a case that has been tried criminally. In these instances, there have facts established by the court to work with. But if a criminal trial didn’t happen, or if the authorities weren’t involved, then the scope of the investigation widens, he explained. However, there may be other parties involved, such as a disciplinary committee or a human right investigation.

“So there are all these investigations proceeding alongside one another and you need to make sure that you’re connecting with those stakeholders and that you’re ensuring that you’re staying in your lane but also protecting your investigation file,” Holmes said. He warned that the focus of all of these other individual parties may be different than the claim adjuster’s. “They’re really only focused on, ‘Did the abuse occur?’ Whereas our investigation and scope of it is going to expand beyond that to the institutional liability as well.”

It’s not up to the adjuster to weigh the credibility of the evidence. In the event a criminal trial has failed, it’s important to remember that it doesn’t mean an abuse didn’t happen. “It just means the criminal aspect failed,” Holmes said. “So it’s important to get that decision, to review it, read between the lines, and to figure out why it failed, because you may still have an exposure on your hands.”

Another unique challenge is that an adjuster may have to ignore their basic training, such as identifying red flags. “If you’re taking a statement, and you’re seeing some of the evidence isn’t consistent or there are gaps, that’s not necessarily an indication [of a red flag],” he said. “There’s a lot of literature out there on memory issues when it comes to traumatized victims. We can’t necessarily rely on those red flags in these cases.”

Teresa Drijber, director of claims with the Ontario School Boards’ Insurance Exchange (OSBIE), expanded on this during her part of the session. She was discussing why victims come forward years later about the abuse they suffered.

“Some of their stories are very vague, but it could be misplaced shame, guilt or suppressed desire to repeat their story, to have to re-live the events of that, because they do have to at least disclose to their counsel what happened,” she said, adding that pedophiles are usually well-known people. They’re community-oriented, applauded for their good work, and generally beyond suspicion. “The victim doesn’t feel they would be believed when they come forward. There’s a lot of difficulty there.”

The combination of all that, plus shame, pushes most cases to be settled at mediation, Drijber said. “[The victims] are fearful it will go to trial. Some of them have already gone through a criminal trial: They’ve talked about it in a public sense and they don’t want to go through it again.”