VANCOUVER – Wildfires have ravaged 27 structures in Telegraph Creek, representing 30 to 45 per cent of buildings in the small northwestern British Columbia community, officials say.

Tahltan Band Chief Rick McLean said in a video posted to Facebook on Tuesday that the town has sustained significant damage, but fortunately no lives have been lost.

“That’s the town. We are the community. We are resilient, we’re going to lean on each other, and we’re going try to continue to fight the fight as best we can,” he said. 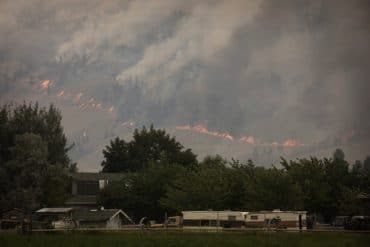 The Snowy Mountain wildfire, currently the largest in B.C., is visible from Cawston, B.C., Thursday, Aug. 2, 2018. THE CANADIAN PRESS/Melissa Renwick

They don’t know yet which structures were destroyed, McLean said in the video recorded at a community hall on Tuesday morning and posted to a Facebook group created to distribute information about the wildfires.

He and McLean both said 27 structures had been lost to the flames.

BC Wildfire Service spokeswoman Heather Rice said the two fires in the area were running parallel and she had not received any information that they’d merged as of Tuesday evening.

Some of the impacted structures were merely damaged, rather than destroyed, she added.

The entire community of Telegraph Creek remains under an evacuation order. Residents living closer to Dease Lake were told on Tuesday to be prepared to leave at a moment’s notice, said Boehm.

Boehm, who is also chief of the Thornhill Fire Department, said heavy smoke has limited air craft in and out of the fire area. Workers are on the ground protecting what they can while equipment operators are clearing the road to allow firefighting equipment to re-enter, he said.

A new evacuation order was issued late Tuesday for several properties west of Topley in the Regional District of Bulkley-Nechako.

The district said the order covers properties primarily at the south end of Sunset Lake. Residents were asked to register at a reception centre at the College of New Caledonia in Burns Lake. The surrounding areas were also placed under an evacuation alert.

More than 460 wildfires are burning across the province. About 50 fires are burning in northwestern B.C., including the 78-square kilometre blaze that prompted the evacuation of Telegraph Creek.

“Some very high winds in the area, as well as continued dry conditions have been really challenging the efforts there,” said BC Wildfire Service spokeswoman Kyla Fraser.

Nearly 80 firefighters, nine helicopters and 15 pieces of heavy equipment are working on that fire alone, she said.

Lightning storms have abated after sparking hundreds of new wildfires in B.C. last week, but Fraser warned a renewed hot spell means no relief for firefighters.

Environment Canada issued heat warnings and special weather statements for large parts of B.C. on Tuesday, calling for temperatures up to 40 degrees in some areas by mid-week.

Conditions were not due to ease until Friday or Saturday, when the weather office said showers and cooling temperatures were likely.

The wildfire service currently lists the fire danger rating as high to extreme across much of the province, with most of northwestern B.C. and the inner south coast, including Vancouver Island, ranked as extremely dry.

Campfires have already been banned in many regions, and Haida Gwaii will join the list on Wednesday as will Prince George, Mackenzie and Fort St. James the following day.

An out-of-control blaze in a rural area of Vancouver Island, southwest of Nanaimo, prompted the Regional District of Nanaimo to declare a state of local emergency Monday night.

The nearly 1.5-square kilometre fire in the Nanaimo Lakes area broke out Sunday and grew aggressively Monday, forcing the evacuation of homes on its west flank and evacuation alerts for 77 properties on the east side.

With the evacuations on Vancouver Island, fires of concern are now burning in all six of B.C.’s regional fire centres.

In southeastern B.C., a 12-square kilometre blaze in Kootenay National Park has caused sporadic closures of Highway 93 and is being managed by Parks Canada and provincial wildfire staff.

Crews were making some progress containing a 120-square kilometre fire that forced evacuation of a wilderness lodge south of Princeton last week and the fire was 40 per cent contained on Tuesday, the wildfire service said.

Although the weather was not giving weary firefighters a break, Fraser said crews from outside the province were lending assistance.

“We have crews from Alberta, Northwest Territories and Saskatchewan that arrived last week. Last night we saw some firefighters from Mexico, as well as firefighters and support staff from New Zealand arriving,” she said.

Teams from Australia were expected to arrive in B.C. on Tuesday.

Forests Minister Doug Donaldson plans to speak with the finance minister about the annual wildfire budget and whether it needs to be revised, considering the increased number of wildfires the province has experienced in recent years, a spokeswoman said.