A newly-proposed flood model can provide a real-time prediction of urban flooding caused by heavy rainfall in a changing climate, but it may not be of particular interest to insurers.

“The model can be used not only for real-time flooding prediction and early-warning, which require as much lead time as possible for evacuation preparation, but also for long-term urban resilience development, which relies on a better understanding of urban flooding risks under future climate scenarios,” said a press release last week from the University of Prince Edward Island (UPEI). 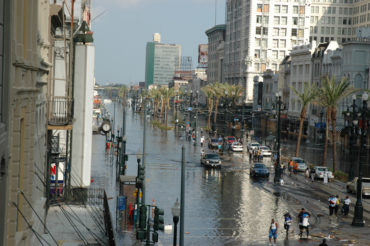 “This new model is completely different from traditional flood inundation models, and it allows us to precisely predict both flood extent and depth for every corner of a city,” said Dr. Xander Wang, an assistant professor at UPEI’s School of Climate Change and Adaptation. Dr. Wang’s research paper on the new mathematical model was published in the latest issue of Journal of Hydrology.

“It will be a very powerful tool for assessing the flood resilience of our cities under future climate change.”

What benefit could this model have for the insurance industry? “This type of model can improve the accuracy of urban flood prediction and therefore provide the data that can help insurance companies identify potential exposure,” Slobodan Simonovic, director of engineering works at the Institute for Catastrophic Loss Reduction (ICLR), told Canadian Underwriter Wednesday. “It is important to understand that this type of model is developed for real-time flood prediction based on the rainfall data in real-time, so insurance may not be interested in this type of prediction.”

The new model is capable of simulating the rapid generation of surface run-off and the “reverse-flow phenomenon” during urban floods. It accounts for typical characteristics of urban areas, such as large-scale impermeable surfaces and urban drainage systems, in order to simulate urban floods more realistically. This reverse-flow phenomenon means the flow of water in all directions, not only downstream, Simonovic explained.

Increasing city resilience to floods under climate change has become one of the major challenges for decision makers, urban planners and engineering practitioners around the world, said the abstract of the paper, Urban flood prediction under heavy precipitation. “Accurate prediction of urban floods under heavy precipitation is critically important to address such a challenge, as it can help understand the vulnerability of a city to future climate change and simulate the effectiveness of various sustainable engineering techniques in reducing urban flooding risks in real urban settings.”

The model uses both surface elevation and instantaneous surface water depth of all grid cells to dynamically determine the directions of horizontal inflow and outflow during each time step of model simulation, the paper explained.

“This enables the model to capture the reverse-flow phenomenon, which is commonly seen in flat urban areas during heavy storms,” Simonovic said.

The model is different from traditional flood models, in that it considers both vertical water flow and horizontal surface runoff at the same time, allowing an opportunity to calculate water depth and extent of inundation at the same time. He noted, however, that the model requires a lot of data: elevations, land cover, soil texture, groundwater level, precipitation and initial soil moisture.

Dr. Wang used the model to “reasonably reproduce the 2016 flood in Lafayette Parish, Louisiana, and it performed very well in simulating both the flood extent and depth.” By doing so, “we demonstrate its effectiveness in predicting real-world flood events.”