B.C. unveils Climate Leadership Plan, plans to reduce GHGs by up to 25 million tonnes by 2050

The government of British Columbia unveiled its Climate Leadership Plan on Friday, which it says will lead to the creation of up to 66,000 jobs over the next ten years and reduce net annual greenhouse gas emissions (GHGs) by up to 25 million tonnes below current forecasts by 2050. 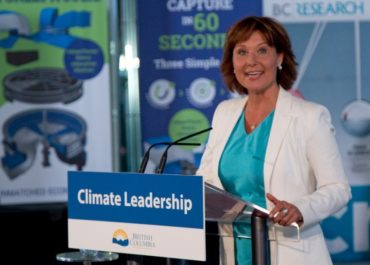 The provincial government unveiled the Climate Leadership Plan, leading to the creation of up to 66,000 jobs over the next ten years, and reducing net annual greenhouse gas emissions by up to 25 million tonnes below current forecasts by 2050. Photo: Government of British Columbia.

The plan’s initial 21 action items include, among others: regulations for more energy efficient buildings; regulating carbon capture and storage projects; launching a strategy to reduce methane emissions, including targetting a 45% reduction by 2025 in fugitive and vented emissions in infrastructure built before Jan. 1, 2015; incentives for purchasing a clean energy vehicle; fuelling marine vessels with cleaner burning liquefied natural gas; and new energy efficiency standards for gas-fired boilers.

“Emissions will be reduced further as subsequent actions are introduced, putting B.C. on course to achieve its 2050 target of an 80% reduction in emissions from 2007 levels,” said a statement from the Office of the Premier.

In particular, amendments are being made to the energy efficiency standards regulation to include increased efficiency requirements for gas fireplaces and air source heat pumps, effective 2018, and high efficiency technology requirements for natural gas space and water heating equipment, effective in 2020 and 2025 respectively. “The [Climate Leadership Team] recommended a buildings strategy that by 2030 would reduce GHG emissions from the sector by 50%,” said a backgrounder from the government.

In addition, the government is implementing policies to encourage the development of “net zero buildings,” including accelerating increased energy requirements in the BC Building Code by taking incremental steps to make buildings ready to be net zero by 2032; developing energy efficiency requirements for new buildings that go beyond those in the building code, called Stretch Codes, that interested local governments could implement in their communities; and creating innovation opportunities and financial incentives for advanced, energy efficient buildings, including an increase in funding for design and innovation.

Recent amendments to the Greenhouse Gas Reduction Regulation will also allow utilities to provide further incentives for the marine, mining and remote industrial power generation sectors, the statement said. It is expected that by 2022 there will be an additional reduction of at least 300,000 tonnes of annual GHG emissions.

The Climate Leadership Plan will be further updated over the coming year, in response to work underway between the federal government and the provinces and territories to develop a pan-Canadian approach to climate action. “The Climate Leadership Plan will continue to be a living, dynamic document,” the statement said. “Government will establish periodic progress reviews on meeting targets and will update the plan as necessary.”

British Columbia continues to have the “highest and most comprehensive carbon tax in North America,” according to the Office of the Premier. In 2013, the province’s revenue-neutral carbon tax was frozen at $30 per tonne for five years, to allow other jurisdictions time to catch up with comparable carbon pricing mechanisms.

B.C. supports the adoption of the province’s $30/tonne carbon tax as the benchmark price across the country. “As any effective price signal on carbon has to go up over time, B.C. also supports increasing that price together in an affordable way, once others catch up,” the statement said. “As provincial and territorial governments are closest to their economies, they can fashion a carbon price mechanism that meets the needs of their own jurisdictions.”

“We are continuing to lead the way in reducing emissions and creating jobs with the release of our new Climate Leadership Plan,” Clark said in the statement. “We are taking action with an approach that balances environmental responsibility with economic opportunity.”

1 Comment » for B.C. unveils Climate Leadership Plan, plans to reduce GHGs by up to 25 million tonnes by 2050